On Feedback and Perception

January 23, 2019
Swami Gulagulaananda quoted:
"Those who cannot learn from history are condemned to repeat it"

I have been a huge hater of auto-rickshaws for a while - Not because they are noisy and unstable, which they are (like their drivers), but because of the irritating quality of the auto-drivers - Price haggling. The drivers often refuse to go where you want, act like they are doing you a favour and continue riding along. And in the rare chance that they agree, they demand a fare over and above the meter charge - Sometimes spouting random numbers which is more than twice the actual fare.

I have captured my frustration in several cartoons, two of which are added here. Here's a comical account for your reading pleasure. 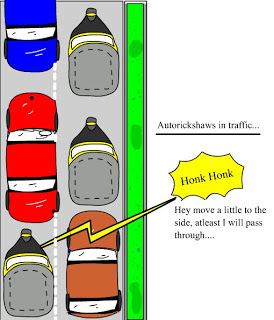 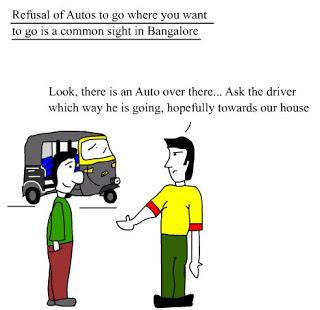 Clearly, citizens who are irritated by this incessant torture of the auto-drivers are going to look at ways to avoid them. Many choose to use their own vehicles while others travel by buses. I had taken an oath of sorts to never board an auto (Unless I was with someone who insisted on riding in one).

As citizens began avoiding auto-drivers, their business got hit and reduced earnings prompted them to increase their minimum fare. An increased fare acts as a deterrent for many.

It was still hard to get around them till Ola and Uber came to the scene. That changed the entire game. Most people prefer travelling by Ola and Uber cabs - Although the fare is higher, there is no problem of having to ask if they are going to do us the favour of going in our direction, there is no haggling and the prices are predictable.

As the auto-drivers started feeling the pinch, they should have ideally introspected and tried to understand the pulse of the customers. Why is it that customers are willing to pay more money and go in cabs? What are the customer pain points? Instead, with a sense of entitlement, they started protesting against the cabs. They have further increased their fares instead of trying to re-earn the goodwill of the customers and have often resorted to abusing those who refuse their services.

I have seen, on multiple occasions, auto-drivers and interested passengers haggling outside the metro station and the passenger saying "I would rather go in Ola/Uber instead of you" and the driver saying "Yeah, go whatever you want" and later complaining about the cab services to their friends. Despite repeatedly losing, their massive egos don't seem to take a hit.

Of course, the sensible ones have tied up with the cab services and stick to their terms. I recently tried Uber Autos which are significantly cheaper than the cabs and have found the experience smooth.

In general, people who don't take feedback seriously and understand what is going wrong and behave with a sense of entitlement are bound to take repeated hits and fail miserably. People who take feedback and improve the condition to delight their customers are more likely to succeed.