There was a tale that I had heard in my childhood. Kanakadasa, the great poet and saint, was asked who could attain salvation by his master, Vyasatirtha. Kanakadasa replied, "naanu hodare hodenu" in Kannada. The sentence can be translated to: "I might go if I want". Many of the scholars at the convention were offended that Kanakadasa had earlier told that nobody at the convention, including his own master, could attain salvation. However, his master saw wisdom in Kanakadasa's words and asked him to elaborate what he said. Kanakadasa explains his pun, which can also be translated as "If I goes, I could go", meaning that a person who rejects ego can attain salvation.

As I looked around at society in general, I started seeing a pattern. I saw a certain quality lacking in most people, and I wondered what the right word for that quality should be - The answer: Mindfulness.

The term mindfulness has started cropping up in multiple places now. I heard about mindfulness a few years ago when an acquaintance started a blog on mindfulness. Most people associate mindfulness with meditation. In this post, I would like to discuss mindfulness as the word: "The quality or state of being conscious or aware of something."

The next time you see an escalator, pay attention to the steps. You'll notice that every escalator has a yellow stripe along the centre. The yellow stripe is like a lane separator. 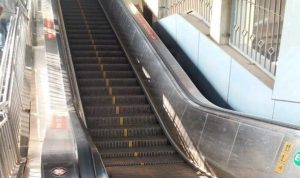 Most people are unaware of this fact and stand around simply without adhering to this rule. Not being aware of a fact doesn't qualify as lack of mindfulness. However, not allowing a person whom they see that a person walking up the escalator to pass, is lack of mindfulness. Why do they have to wait till someone comes up to them and says "Excuse Me?" when they have noticed this person walking up to them?

Mindfulness is being aware of what is happening around us - being mindful of people around us, being mindful about the trouble that we put others through due to our actions, or thinking how we can alleviate the pain of others through our actions. One does not necessarily have to go out of their way help others. One simply needs to tune in to their surroundings and go beyond the self to understand what's happening around.

Two days back, I was riding towards my house on my motorcycle when the car in front of me suddenly swerved to the left without warning because he wanted to stop. I applied the brakes immediately, more or less being convinced that I was going to ram into the car. Fortunately, the bike skidded to a halt about a foot behind the car. The sound made by my bike skidding prompted the passengers in the car and the driver to look back at the source. Being rattled, I questioned the man why he hadn't turned on his indicator if he wanted to turn to the left. Rather than apologising, the passenger at the back turned defensive and indignant as if I was not paying attention while driving and started arguing. The driver who knew that he had made a mistake should have simply apologised. But we digress. The main point was that the driver was not being mindful of his surroundings - He simply turned his car to the left because that was what he wanted to do. He was not mindful of what impact his actions could have on others.

I am sure that looking around will give you plenty of other examples of situations where people can be more mindful. People who play songs in the metro or bus or while walking in the parks without using earphones, people who talk and laugh raucously, people who honk incessantly, people who double park, park incorrectly, drive in the opposite direction are examples of people not being mindful in obvious ways... People not cleaning gym equipment after use, leaving toilet seats up, not flushing all the way, not muting phones during meetings or while watching movies in theatres are other (subtler?) examples of not exercising mindfulness.

As a population, we need to start becoming mindful - And most of us can achieve this goal of moving towards mindfulness. However, people who have had a sense of entitlement ingrained in them for a long time or people who are more self centred may find it very hard to acknowledge that they were wrong in the first place. After all, acknowledgement of mistakes is a prerequisite to course correction.

Therefore, it is imperative that we teach children to be mindful and sensitive to others right from their childhood. If we teach children the differences between right and wrong and how their actions have ramifications, they will grow up to be upstanding and outstanding citizens of the country.