About ten days ago, I wanted to book a couple of rooms for my parents for a visit to Mangalore. As a regular user of online services like MakeMyTrip  Cleartrip and Go Ibibo, I decided to open three tabs in my browser and check prices across all three portals (Something that we all do). I was, obviously, signed in as I wanted to redeem my wallet points. After seeing that MakeMyTrip was the cheapest, I decided to go ahead with it. 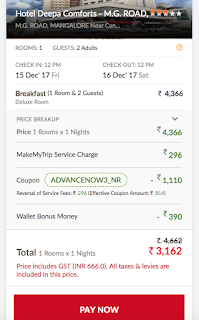 I saw that the cost of the room in MakeMyTrip in the booking page was Rs 3162. The screenshot shows the price breakdown. As per this, the room originally costs Rs 4366. They then added their own charges, applied some coupon automatically and also reduced my wallet money. The final bill, inclusive of taxes, came up to Rs 3162.

I was happy as any regular customer would be when they see the original price struck off and a new price shown next to it. Rs 4662 Rs 3162. Wow that is a savings of Rs 1500!

I proceeded to click on Pay Now in order to complete the payment. In the next screen, I was supposed to provide my credit card information, just like any other online portal.

I went ahead and punched in all the relevant information, waited patiently for my OTP and completed the transaction. On noticing the final amount billed in the SMS that I received, I was surprised to see the final amount was not Rs 3162. Instead, it was Rs 3552.

Incidentally, I had to book another room a couple of days later, and proceeded to book the other room. It was then that I paid careful attention and observed that the price actually changed in the checkout page.

If you observe this screenshot, the amount has changed! This time I realised that it must be some bug on their portal.

Having used several online portals in the past, I was confident that MakeMyTrip is an honourable organisation that would refund the difference because it was clearly an error on their side. Some sort of a bug, I assumed and went ahead and completed the transactions.

Immediately after the transactions were completed, I called up MakeMyTrip Customer Service and informed them about the issue. As any courteous customer service representative, I was informed that they would take care of the problem. "We will be sending out an email to you, Sir. Kindly send us the screenshots, and we will look into it". I was assured - You know, it's MakeMyTrip!

A couple of days later, I received a call. The customer service representative told me that the offer was applicable only on mobile devices. Since I booked from a desktop device, the coupon is not applicable, I was told. Any regular website clearly indicates that in the booking process. "Avail additional 5% discount by booking through the app" is a standard type of message that we have seen in the past.

"I'm sorry, I can give you MMT cash, not refund" I was told. I was furious and told them that that was not an acceptable solution. They told me that they would get back to me.

Excuse 2: You are not signed in!

Excuse 3: Are you a scammer?

The next time I received a call, I was told that the screenshot did not have information about the time at which I took the screenshots. Perhaps you took screenshots at different intervals of time.

I was obviously livid at the insinuation, and yet calm in my response. Is the accusation that I am running some sort of a scam for a measly couple of hundred bucks? Alright, I will send you a video recording. Just for your information, the issue continues to exist. Did you even try to reproduce the matter? The representative said that they would get back to me.

Excuse 4: We cannot give you partial refunds!

By this time, I recorded my entire flow and uploaded a video onto Google Drive. The video is available at https://goo.gl/KdLV39. I sent them an email with the link.

Another call - Sir, unfortunately, we cannot give you partial refund. What we can do is, we can cancel the entire order. You can then go ahead and book the order again.

I asked him - Did you have a look at the video that I had sent to you?

No. However, our system does not have a capability to give you partial refund. We can cancel the entire order and give you a complete refund. After this, you can book the rooms again.

What if the rooms are not available after cancellation? What if the prices have changed from the time that I have booked? What will you do then?

No, I cannot believe that MakeMyTrip has been around since 15 years and you don't have tech ability to give me partial refunds. I want the partial refund - I am not even asking you for extra money, I am just asking you for money that I am supposed to get. Redeem the wallet cash and refund that into my card.

The representative said that they would get back to me.

Please note that though I was irritated, I never raised my voice nor spoke rudely.

However, this was by far the most irate CSR call. The lady at the other end told me that she checked with the tech team. As per the conversation that she had, according to their terms and conditions, no two offers can be clubbed. Since a coupon code was applied (by them only, I didn't apply anything), wallet cash could not be redeemed.

I told them that that was not the case. I explained the problem to her (mentioned below) and she flatly refused to do anything about it. I told her to give it to me in writing (since none of the previous representatives gave me anything in writing, and each of them tells me fantasy tales), which she agreed... and sent me some junk line some time later. I have escalated the issue and am patiently waiting for them to get back.

I also made it a point to ask if partial refunds was possible, and she told me that it was definitely possible if they see that they were at fault. Which means the previous guy lied to me.

And on top of that, my issue keeps getting marked as resolved despite my insistence that it is not!


So, what's really the problem?

Here's the problem - MakeMyTrip has, perhaps, the world's shittiest interface when it comes to coupon redemption. Despite being signed in, users are expected to sign in again, for a second time, in order to redeem the wallet. People who see wallet applied, don't pay attention to signing into wallet again (because it is unheard of, signing into the same system twice!)

Even if you sign in, if you press the back button and come to the screen again in the same session, you are signed out again!

This is horrible user experience.

This video is available at https://goo.gl/2Ztc4q. If you observe this video, you will see that the terms and conditions reason is absolute BS. It is a tech issue on their side.

The resolution is simple - Just redeem all the applicable wallet points for each of my orders and refund that much to my credit card. I can't understand why they are acting like I am asking them for something unreasonable like their kidneys!

On a side note, I think I should be paid some kind of bounty for pointing out such issues on their website!

I have now decided to continue fighting this to see how far I have to push till I get that refund. I am pretty sure I am going to approach the consumer court for this.

Meanwhile, this should serve as a lesson to others - Login to MakeMyTrip wallet in order to use their crappy interface or avoid them completely and use Cleartrip (which has always been smooth)

Appeal:
Please help me by sharing this so that my voice can be heard by the heads at MakeMyTrip