September 16, 2017
Swami Gulagulaananda said:
"It is amazing that a tiny seed can grow into an enormous tree"

India lives in its villages - We have heard this many times. And while steps are being taken to 'Make in India', India is not considered to be a manufacturing hub yet - especially when compared to her giant neighbour, China.

Manufacturing is a challenge, and for that matter, entrepreneurship is a challenge. While there are many challenges in starting and building your own enterprise, from hiring and retaining good people, purchasing raw materials and paying for other overheads, the challenges generally have one common denominator - Money.

You need money to hire people, money to purchase raw materials, money to pay bills etc. And getting money is the biggest challenge. Once you have a certain amount of money, that money can be put in to generate more money through the business - use a bit of it for operations, a bit of it for purchasing more equipment or hiring more people that generates more revenue subsequently and so on (The usual CapEx and OpEx).

The main question, however, is - How do you get that initial seed money? This is especially a problem when you are not well connected. There are many people from villages and tier 3 cities who are interested in developing small scale industries. Villagers and uneducated people find it very hard to raise funds. They may have the entrepreneurial drive but without a certain amount of credit rating and connections, raising funds becomes impossible considering that they are also from poor backgrounds.

Another interesting aspect to notice is the amount of money that these people usually require. The amounts are generally under Rs 50,000 with many people needing around Rs 10,000. These amounts are not very high when you compare it with the salaries of IT Professionals in tier 1 cities, for instance. Single outings to an upscale restaurants cost about the same.

This is where crowd funding comes into picture. Lenders who have a certain amount of surplus money can pump it into this system. Entrepreneurs who are interested can sign up with this system. This money is not charity. The money from the lenders are given as loans to the entrepreneurs. This money is divided into a large number of small amounts and each chunk is given to an entrepreneur. The entrepreneur is able to raise the requisite amount of money and utilise it for their business. Every month, they repay a small amount of money to the crowd funding organisation.

The crowd funding organisation can then repay the money to the lender who can choose this chunk to further invest in another entrepreneur. Remember, this is a loan - and the lender is expected to get his principal amount back. Think of it as a 0% loan - So, the only charity that you are losing is the interest.

And since a very small chunk of your money is going to each entrepreneur, a default is going to impact you very little. All your eggs are not in the same basket.

This is where I would like to introduce Milaap - Milaap is an online crowd funding platform that bridges the gap between lenders and people who seek money for various causes; entrepreneurs, medical, education, etc.

About a year ago, I invested a very small amount of Rs 2500 into it since I was not very confident of the platform. I had lent the money to some small scale village entrepreneur. As time progressed, I started receiving notifications that my amount was repaid. I had signed up for 'Auto Lend', and this repaid money started getting circulated to other entrepreneurs. Though it was just Rs 2500, the total money that got lent after repayment became over Rs 8500 and more.

I have now pushed in some more money into the system; because some small pieces of statistics had a pretty nice impact on me. Their dashboard showed me that they had made 28 loans and impacted 432 lives. They have also provided information about all the people to whom the money was lent.

Of course, there is an amount of risk involved here. I am trusting Milaap and their associated organisations to ensure that my money is not swindled and lost. There is a certain amount of faith that you need to have, and a certain amount of risk that you have to be willing to assume. But if it works out - There is a huge satisfaction of having played a role, however minuscule, in improving small scale industries in India.

Remember, you can pull out your money at some point in the future and this is a loan. So, please take a moment out of your busy schedules and explore Milaap or any equivalent organisation. Or if you have more time, try to invest in some small scale industry.

After all, Sab ka Saath, Sab ka Vikas should be applicable across the board. What is the point of growing alone - We should be taking everyone along and grow together...

Click on this image to view a larger version 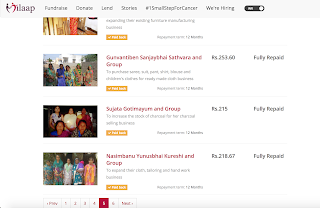