October 21, 2015
Swami Gulagulaananda said:
"That moron asked me not to be judgemental about him"

We love watching movies and I am sure that you have watched this scene that appears in several motion pictures; The protagonist walks into his house and is shocked to see a dead man with a knife sticking out of his stomach. He drops whatever he was holding and rushes towards the slumped body he has identified as his father, an eminent lawyer who fought injustice with a fiery passion. It is obvious to the son that his father was murdered by some land baron / politician who was rubbed the wrong way by the deceased, but he puts those thoughts aside for the moment. He has a slight glimmer of hope that his father might still be alive and worries that he is in pain. He crouches beside his father and pulls the knife out of him. At that exact same time, a police inspector and a couple of constables arrive at that scene on a supposed tip-off. "Hands up, you are under arrest" he shouts as the constables proceed to hold down the grief stricken man. "I have done nothing, I am innocent. Oh father!" yells the protagonist as he is dragged away handcuffed. Upon investigation, it is found that the hero's fingerprints are found on the knife. They also find the lawyer's blood stains on the son's clothes. "It has been done for property" announces the public prosecutor with a flourish after systematically placing the "facts" in front of the court. The court announces that a remorseless greedy son such as him deserves to languish in prison for 14 years. The land baron shouts "Cheers" immediately in the next scene as his cronies join him in raucous laughter...

We feel sorry for the protagonist. Of course, it is a movie and you know sooner or later, the evil people are going to pay their dues while the hero winds up with that beautiful heroine. However, the truth is that the hero was falsely implicated by prima facie evidence. It is only that WE know that it is a movie and that WE know that the hero was innocent that we aren't worried about it... 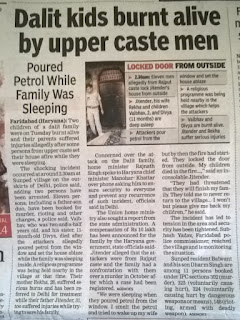 This is a newspaper article from Times Of India, dated October 21, 2015

Click on the image to enlarge the image and read the article. Now, from the headlines, it is very obvious that this is some sort of hate crime. Poor Dalits - that too kids - were burnt alive by vicious thugs from upper caste.

Immediately people will start fortifying thoughts that they have had in the past - India will never grow because of casteism. That's right, this stupid system has been a dark spot in the face of India's cultural past. Then some "intellectuals" will start talking about "blot on democracy" and "fabric of society" while moron Congress supporters will start saying "Oh, so this is the Acche Din promised by Modi"

Alright, what happened to those kids is really unfortunate. However, please read the article carefully - Do you see any reason for the killing? The only point mentioned here is "confrontation over a murder" which is not clear - Who murdered whom? They have also mentioned that "a religious programme was held which helped the attackers" - How? Atheists will now talk about how religion and caste is responsible for all sorts of problems... 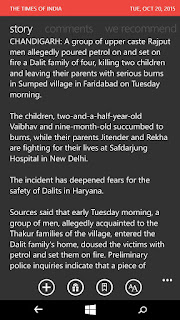 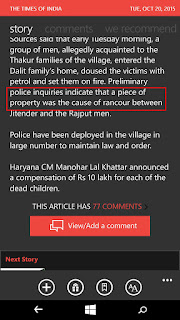 See the highlighted section? Police inquiries show that a piece of property was the reason for the hatred between them. Clearly, the Dalit and Upper Caste Rajput had no role to play here. The dispute was because of some property. If that is the case, why is it that the story is projected in a different way? Also, why is it that there is no mention of "property" in the print version?

Here is another news item - Again, Times Of India 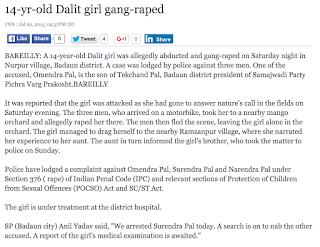 Dalit girl gang raped - What kind of headlines is this? Shouldn't it have been "14 year old girl gang-raped"?


You see, these journalists understand exactly how to play on our sentiments. By showing only bits of information and presenting it in a certain fashion, it is very easy to play with people's minds. Take the case of Dadri beef lynching - It is amazing how people quickly spoke about the safety of Muslims in India. I even read some ridiculous comments equating Indians with ISIS because of some sporadic killing.

While I observed great commentaries on the regrettable killing of a couple of men over beef, I rarely see any voices against the systematic holocaust of Kashmiri Pandits. Why do we not read about them in the papers? Why do we not hear debates about them? Why is there no anger? 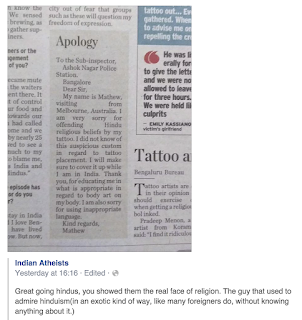 I specifically mention this because people vehemently oppose painting all Muslims with the same brush because of the acts of a few terrorists - absolutely agreed. A few bad eggs don't necessarily define the entire religion - and yet, "intellectuals" who claim to be the voice of reason because they are also atheists write things like...

Summary
Before you arrive at any conclusion, make sure you have all the facts ready. Just because you are reading some printed material, don't jump to the conclusion that the material is 100% true. History is often tainted and historical records of the so called great kings should only be taken with a pinch of salt because those records were written under the aegis of the very king they are describing - Who would dare call a king a moron when he has the ability to hang you or drive a spear through the heads of your entire family?

Similarly, journalists also have ulterior motives. They like to sensationalise and stir emotions of the masses. It's imperative as educated people to invest more time and energy into uncovering the truth before branding things and drawing conclusions and judgements. More importantly, we should develop an understanding that things don't need to be exactly the way in which it was presented to us - The hero was indeed caught holding a knife that killed his father... But he was innocent all the time. Do not judge before you know the full facts.
Rant

Unknown said…
These were exactly the same thoughts I had when I was thinking of role of media and how we end up believing them at times. I like the way in which u have supported this with some facts. Thanks for this.
21 October 2015 at 22:12