August 17, 2013
Swami Nikhilaananda said:
"An Apple a day will definitely make me bankrupt"

[The purpose of this post is not to tell you how to get themes, mod or dropdown menus]

I have an old iPod - 2nd Generation 8 GB one lying around. With the rapid rate at which technology becomes obsolete, I often wonder if investing money into buying gadgets really makes sense. Apple promptly stopped support for the older generations of devices, with no software updates beyond 4.2.1 and none of the newer apps work on my device either. Which means, I have to be happy with whatever apps I had installed. It suddenly went from a savvy gadget to ordinary music player - something that phones do as well.

I also have a Raspberry Pi and I thought - it would be really cool if I can somehow make my iPod a screen for the Raspberry Pi - Act as a monitor. That'll give me a small computer of sorts. My first thought was to run a VNC server on the Pi and a VNC player on the iPod because I was looking for a GUI. However, the VNC thing didn't really pan out because the apps are no longer compatible with my old device.

So I jailbroke
There used to be this great site called jailbreak.me that would let me jailbreak my device just by going to that site and sliding a button. But that site no longer supports older devices. Greenpois0n came to the rescue

I followed instructions and jailbroke my device in about 5 minutes or less. Then I was able to do some very interesting things. Jailbreaking gives you root access to your device.

OpenSSH
If you install OpenSSH through Cydia on your iPod, you can SSH into your iPod from your computer. Also, it is highly advisable that you change your passwords.

MobileTerminal
Next, install MobileTerminal. This is where most of your cool stuff happens. This gives you a Terminal Emulator in which you can run commands like ls, locate, grep, find etc. It also gives you 'apt-get' abilities. 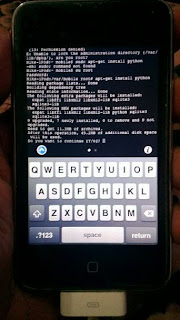 Python
Install Python. And Python setup tools to get easy_install. There's also Ruby if you prefer that.

VIM
Clearly you need an editor to stuff. So I installed VIM with sudo apt-get install vim. You can do all your regular vim stuff.

Install sudo
Root access is always dangerous. Install sudo with apt-get. Then Add yourself to the sudoers list using visudo.

wget
Install wget. While typing small commands is fun, typing out large files is pretty time consuming in a small keyboard. I was trying to type in a config file that was six lines, but considering the special characters were more than a few, it was time consuming switching between keyboards. So I typed it on my laptop and did a wget to my iPod.

iFile
iFile is a great tool that I greatly recommend. It gives you a file explorer and also the ability to view, upload and download files from your laptop by making your iPod into a webserver. It's a shareware and I think is a small price to pay for the great features. 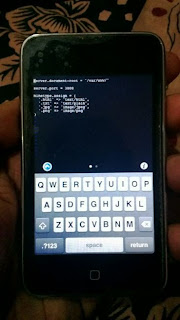 Lighttpd
I thought nginx would be cool to run, but since I didn't find it, I installed lighttpd and got it up and running. I couldn't believe it when "It works" on my laptop screen. My iPod was actually hosting a page

Databases
I think sqlite is already installed, there's Postgres and mysql too! I haven't really explored much.

Other Tools
Other tools such as awk, sed, zip etc. are also available.

There's a lot more to explore
I was just excited to share this small finding with the rest of you who might have thought that your old iPods are useless. Now you can do a lot of things with it. Also, not all commands work on the iPod, for example, I could not add another user. But still, it's pretty cool. And share your findings with me as well.
Technical