March 16, 2013
Swami Gulagulaananda said:
"It is the mind that makes you feel what it wants to make you feel" 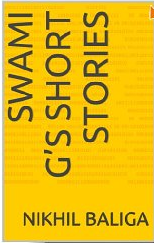 My head was feeling heavier and lighter alternately. I could feel myself letting go as I relaxed in my easy-chair. I imagined that this was the kind of headiness that was experienced by those who consumed liquor. I tried to open my eyes but could barely get my eyelids to separate. When I did manage to squeeze some sight through a narrow slit between my eyelids, all that I could see was some white light. I let out a soft groan.

"Are you in a condition to speak?" said a dignified voice. "Yes, I am just finding it a little hard to stay conscious" I replied. "That's good. A semi-conscious state seldom exercises restraint. When the inhibition centre shuts down, the invisible iron curtain crumbles and like water escaping through the breach in a dam, all your thoughts will come gushing out. I believe we can have a meaningful session today. Indeed, I do" came the reply.

I tilted my head gently to my left and slowly tried to open my eyes once more. Through the curtain behind the chair in front of me, a sliver of light crept in and illuminated the back of the man who sat in the chair, casting a silhouette. With quite some effort, I managed to focus my eyes on the stolid countenance of the psychiatrist. The elderly gentleman's bespectacled face betrayed no emotion, his thin lips set in a horizontal line. His eyes though, were alert, focused and strangely not blinking, as if he didn't want to miss out anything. It was hard for me to believe that a man like this could have such a baritone voice, deep and yet cultivated and pleasing to hear. I turned my head to my front once more, grateful that he had agreed to come for a house visit.

"So, when did you realise it?" asked the doctor persuasively, "Or would you like to start from the very beginning?" he added. I closed my eyes to focus better. I didn't want the strain of processing visual information to clutter my thoughts. My brain clearly didn't have adequate energy to process sight AND recall memories. "There's not much to say about the beginning. I was waiting at the bus-stop in front of my college when I saw her. She looked very beautiful and I was attracted to her. I knew she was from my college because she wore our ID card. I wanted to talk to her and so I approached her and not knowing what to speak, asked her if she had any idea when the bus would come." The doctor seemed to be jotting down something in a little notepad that he held in his hand. "Was there anyone else there besides the two of you?" he asked, to which I replied "I don't remember seeing anyone. Maybe I was so attracted to her that she became the only thing that filled my eyes. Or maybe there was nobody there, I really can't say." "Love, huh?" said the doctor and smiled. I said nothing.

"Proceed" he said. "She seemed sweet. I asked her about her class, she asked me about mine. We made fun of some teachers, I was pretty good at mimicry and made her laugh with some imitations. Her laugh had a very nice ring to it and I wanted to hear it all the time. I never do it, and she said neither did she, but we decided to exchange our phone numbers. We had let our respective buses go because we felt we were enjoying the conversation. We both didn't want it to end. I knew I was falling for her, and hard." I kept silent for some time. The doctor waited patiently. I think he could understand the pain I was going through. "We spoke over the phone. A lot. For hours together. We had a similar wavelength, it was like I was completing her sentences and she, mine. And we both knew what the other was thinking. I thought, there can be no way that we will have disagreements ever. This was what resonance meant."

I continued "I finally confessed that I was falling in love with her. She said that she too was falling in love with me, but for us to be together, she had a strange proposal. I should have guessed when she suggested that" I said.
"Uh huh? What was it that she proposed?" asked the doctor.
"She told that neither of us would tell anybody else about each other. That it was to be a complete secret"
"And you agreed to this?"
"Yes"
"Why? Didn't you think it was strange?" asked the doctor as he continued scribbling.
"I did. But then she said that if we both agreed and understood, that was more important. That it was pointless trying to convince others as to why we did what we did. In the end, we were to be with each other, and it was important that we understood each other"
"Interesting" said the doctor. "And did you ever feel that you were being manipulated?"
"No, never. I guess I have a quality of trusting people. Mistrust and distrust, I believe that the human society cannot live with it. We eventually have to trust somebody"
"I see. And none of your friends knew? What happened after that? When you got married, I mean."

I slowly opened my eyes. I was a little less drowsy. I recollected the conversation. "I told her that I wanted to get married in the conventional way, in front of friends and family. She said she wanted to live with me forever, and that marriage was a waste of time. However for legal reasons, she was willing to sign and get married in front of a judge. But the fanfare was something she wanted to avoid."

"And you agreed to this too?" asked the doctor. I could sense a certain element of bewilderment. A man I believed to be completely impassive possessed emotions afterall.  "I did. I loved her and I didn't want to lose her. I agreed to her silly conditions for that singular reason. And she added that she didn't want my friends or family to know. It was strange. So when I got an opportunity to move to a different country, I took it. My boss was pleased, my family was pleased because of the dollar rupee conversion, and she was pleased because nobody would bother us. And I was pleased, because it seemed I got it all"
"Indeed. But for how long? Sooner or later, your family would want you to come back and get married."
"I thought of that. And I convinced myself that I would cross that bridge when it came. The immediate plan seemed to work"

"So when did you realise it?" asked the doctor again
"I know introverts. But this was a different kind of introvert. She met nobody, she spoke to nobody else. She never went out of our house. Not even to purchase provisions. She bought them online and had them delivered. They would be lying outside the house, she wouldn't even collect it from the delivery boy. I used to bring them inside when I came home. At other  times, she would call me at work and ask me to get provisions on my way back. I began thinking then... What could be the reason for that"

"And that made you realise? That she was not real? That she was just a figment of your imagination? That that was the reason she was completing your sentences, they were the same sentence after all. That you were the only one who spoke to her? That she met none of your friends and you met none of hers? That that was the reason you had to move away from your friends and family because sooner or later you would realise that it was all not real? That it was you who was placing orders online? If there was nobody to collect it from the delivery boy, it will lie outside your house, am I not right? You subconsciously knew she was not real. You didn't want to consciously realise it. That was the reason you left home to an unknown land, didn't you? You had an idea that there was something wrong with you... mentally"

I turned to look at the doctor. His alert eyes were focused on me. His thin lips, expressionless. His eyes, expressionless. "Yes" I said. "It was then that I realised. I think I am schiezophrenic, and I need help" I said.

Suddenly the door opened and my wife walked into the room and said - "I thought I heard your voice. Who are you talking to?" I turned to look at the doctor, and his thin lips had a smile. "Indeed... You have a problem. You need help" he said.

***
You may also like to read
Other short stories, by Nikhil Baliga

Madhura Basavaraju:
awesome!! i know that's an understatement.. u should think of writing a novel!

Roshni Ramesh:
I liked the ending a lot :)

Lokesh Acharya ‏@acharya2
nice one sir.. :) most of your love stories make me get scared :-P :-$