Of Goodness, Pragmatism and Reciprocity

November 24, 2012
Baba Gyani Triviani said:
"In Bangalore city, the general public is like the Joker. They work very hard to bring the White Knight down to their level"

Just the other day, I was reading an interesting article about reciprocity. Apparently, the maxim "One good turn deserves another" is imbibed into our culture very deeply, so deeply that we remember good turns done to us and return favours invariably, if not immediately then over time. A good demonstration of this can be seen in the experiment by a well known psychologist whose assistant got twice as much money for raffle tickets when he got the people some coca-cola to drink (as a good gesture), than those who didn't get coca-cola - and people who didn't like him but got coke also paid double of those who liked him but didn't get coke. Amazing, isn't it? The author goes on to say that reciprocity works everywhere.

But I don't think this theory works all the time at all. In fact, a couple of days back, I was driving past an intersection near my office. This junction doesn't have traffic lights but desperately needs one. During peak office hours in the morning, there is the presence of some constabulary that seems to prevent congestion. But evenings have a different tale to tell. The vehicles seemed to be randomly placed in that junction, each one pointing in arbitrary directions. By the time I reached the junction, I was flustered seeing this sight and decided to be the bigger person, you know, the one who waits patiently for the morons to settle it. There was a large Tempo Traveller next to me who also decided to be  the bigger person. So the two of us decided to wait. Pretty soon, the traffic decongestion began somehow (Bangalore traffic works somehow) 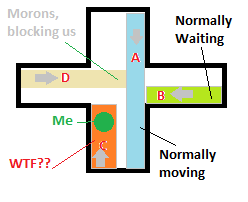 We decided to give it a few minutes and pretty soon the traffic in the road perpendicular to ours started moving freely (Both B and D) while we (A and C) waited patiently. We expected that the vehicles on that road will stop after some time to let the vehicles in our lane to move - That never happened. Instead, when our turn came, A started moving but D moved past their line and came till A's line, meaning we were stuck. And when the number of vehicles in A started waning, B started and we couldn't do much because D had blocked us and now B came in front of us...  We were being good, and we got nothing in return. This happened for quite some time - we were stuck.

Notice that I am not new to Bangalore. So I know how crappy traffic can get. I was just seeing how well this so called "Reciprocity Theory" works. Apparently it doesn't. Apparently, people in Bangalore don't really care or are not even able to see that I was doing a good deed, that it was their turn to return it. Rather, they must be guffawing thinking "What a bunch of morons waiting there" Eventually our patience started wearing thin and both the Tempo Traveller and I started ploughing through, creating a path for those behind us. To summarise, you cannot rely on people's goodness. you have to rely on yourself (Which is sad). Or maybe, the reciprocity theory works where people are handled individually. When there is a large mob, a different theory works.

However, there is an important lesson for all of us to learn - Expecting others to be good to us because we are good is like expecting a lion to not eat you because you are a vegetarian. This is an old saying, but it is a true one. In fact, there is a nice little story


A long time ago, a great sage was walking through a forest when he came across a cobra. The cobra raised its hood and said "Oh great sage, tell me how I should lead my life" The sage replied "No matter what you do, don't hurt others." The cobra nodded in agreement and led a good life. A few days later, the sage who was walking back through the same forest met the same cobra, who looked battered and bruised. "Oh great sage. You had asked me to not hurt others. However, when the village people see me, they hit me with sticks and pelted stones at me. And I, having promised not to hurt others, simply had to escape to save my life." The sage smiled and said "I asked you not to hurt others... I didn't ask you not to hiss"

As you can see, a gentle and kindly posture is often taken advantage of. There is another saying "People always dig where the earth is the softest" Similarly there is no dearth of people who take advantage of goodness and kindness. It's therefore vital to at least have a posture of one who doesn't seem like one who can be taken advantage of.

Emperor Ashoka, after having witnessed the aftermath of the carnage at Kalinga, not only took an oath to be a peaceful monarch but also switched to Buddhism (from Jainism) in a bid to project peace. However, the emperor was an emperor and not a small king. He had an empire that stretched from Afghanistan all the way across till Myanmar, and all the way south. Such a vast empire could not be ruled by an emperor who said peace and eliminated his army, for isn't it logical that army is used for killing? True, but the emperor continued to maintain a large army for self defence. Just because he was peaceful, he didn't expect the enemy kings to not wage war.

To summarise, we have to remember to be good and kind, but not be naive and believe in reciprocity. For we should learn to be pragmatic. It's good to believe in idealism, but vital to know the realities of the world.