If you look around you, you will see that most decisions are made in the same way. Whether it is decisions in companies (based on share percentage) or in politics, this concept of 'majority wins' is the common way of deciding.

My first question is, why do we consider majority? And my take on that would be - So as to appease most number of people, piss off least number of people thereby having increased general happiness (You know, if each person's happiness was measurable in units, we would have had more such units).

The real question is - Does majority imply correctness? Let's take the scenario of four drunken revellers who are so sloshed they don't know and/or don't care of what's happening around them. So in their stupour, they hurl a large rock into the showcase of a shop and break the glass. The shopkeeper is naturally enraged and along with his wife (who was with him in the shop) come out to fight. The drunken men turn out of to be local ruffians and place a call to their friends. Before the shopkeeper is able to convince a couple of fellow shopkeepers to help him hand over these thugs to the police, a Maruthi Omni, a Tata Sumo (and some other vehicles that we normally associate with hoodlums) come to a screeching halt and the doors slide/spring open and about a dozen rowdies tumble out with their unkempt hair, unshaven face and various talismans hanging, clutching hockey sticks, swords, choppers (and any other weapons that we normally associate with them). The shopkeepers are unnerved. Nobody is ready to even stand there, leave alone fight. The shopkeeper ends up begging for forgiveness in order to avoid problems. The revellers guffaw and walk away. The point to be noted in this example is that, the majority side was that of the thugs and they won. Yes, they won, but they were not correct. Therefore, majority doesn't imply correctness.

But if the majority was correct, the world is a lot safer. In the above example, if there were some 25 shopkeepers, and 4 drunk ruffians, they could have easily tackled the situation and roughed them up before letting the law take its course (or maybe asked them to pay for the damage and let them off with a warning) or whatever is the course that they thought was appropriate.

Now extend the same to religion. I am going to pick the six major religions in India - Hinduism, Islam, christianity, Buddhism, Jainism and Sikhism. Among these, Buddhism, Jainism and Sikhism sprang out of Hinduism and therefore have a lot of similar characteristics and features - including ahimsa (non violence) and tolerance to other faiths. Therefore I am going to club them into Hinduism on account of these two similarities and refer to all of them collectively as Hinduism. The reason why India, with such great diversity can survive for so long is because of religious tolerance. In fact, in the Gita, Krishna says that you can worship God in any form (or attain God through other means) and it will eventually go to one God in the end. At no point does Hinduism claim to pray to only one God (Although it does say that there is one God in the end - It's actually monotheistic in nature) and at no point does Hinduism say that you are going to hell or be damned or brand you as an infidel or a heretic or say that you have lost your way if you have faith in another religion.

This remarkable feature is lacking in Islam and christianity - where it is written that those who follow other faiths are infidels and heretics. Therefore, if you are a hard-core believer of these religions, it should and will become impossible for you to accept other faiths. It just becomes unacceptable. And if you claim to be secular in nature, then it is impossible that you are a hard-core believer (or maybe you are believing in a more peaceful version or choose to ignore that clause - which makes it a very welcome move) This, in my opinion, is the major driving force for aggressive christian evangelism, something that I spit on. The fact that you cannot accept another person's faith is very disturbing.


Do not think of this post as a 'hate post', rather just run your imagination for some time. Now imagine if the country was dominated by religious fanatics such as these people. Intolerance would be everywhere, and Hindus and moderates would be completely subjugated. You will naturally become like that shopkeeper who was being harassed. Christian evangelists derive great wealth from Europe and America, while I find it strange when Indian Muslims support Iran and Palestine - because Muslims are losing there and for no other reason, to show brotherhood (across nations, mind you). India is the only place for Hindus (I don't really think of Nepal as a country) and we are dividing ourselves further with petty reasons like caste and what not. While we end up getting more and more fragmented, the majority will no longer be with us. And after that, there is nothing that you can really do about it - because you no longer hold the reins, because majority wins.

Case in point of ganging up of a lousy comment followed by people who liked it - See a pattern: 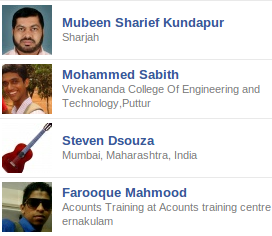