May 12, 2012
Swami Gulagulaananda wondered:
"We all become who WE choose to become. And that choice cannot be forced by anyone upon us."

With the internet becoming more easily available, significant changes have come along. Now, the world is divided into two zones - The real world with people, and the virtual world with tweeple. The difference between these two worlds is that, in the virtual world, a lot of people hide behind curtains of anonymity. And since it's difficult for others to trace them, they become bolder, they speak out vehemently - Something that they probably wouldn't have done if asked to talk amidst other people - because they fear repercussions, the fear accountability or they fear the obvious things that happen if you raise fingers at politicians or hoodlums. However, under the cloak of anonymity they are free to have opinions.

Those of you who have been following news regularly would be familiar with a certain judge's controversial remark. I am not very sure about the entire case, but let's assume that the following is the way it happened. What I am more interested in, is to listen to what others have as opinions. I did ask some people for their opinions, but what's a better place than asking people of the virtual world? Even if you don't comment or post your opinions, it would be great if you could put in a certain amount of thought if you feel that it is (or is going to be) relevant to you.

The case (Hypothetical?)
A man has been married for x number of years (I have kept x as variable because your opinions might differ based on x... Read on) and both him and his wife are employed in different companies. For simplicity, let's take that both of them are 'techies', so as to bring about an image of a financially well to do upper middle class family, completely self sufficient. One day, the man gets to know from his boss that he's being transferred to the US (or some other major Indian city - another variable) for the next 5 years (again, let's keep this variable). He tells his wife, and his wife says that she doesn't want to leave her job. Naturally the man doesn't want to be away from her for so long, so he insists that she comes along with him, for he doesn't want his family broken up. They have a nasty spat which continues to worsen. They go to court as a divorce petition comes into the scene. The judge after studying says "Why can't you be like Sita, who followed her husband Ram even into the forest?" and this sparks a huge debate - with feminists crying foul, saying that the comment is regressive.

What would you do?
For those who know not, when prince Rama was exiled for 14 years, he alone was supposed to go into the forest. His wife, Sita who was a princess and being brought up amidst great luxury and royalty chose to follow her husband for her opinion was that her place is with her husband. Rama hadn't asked her, but she chose to follow him anyway, chose to live through the hardships of the jungle.

But the question is - how relevant is Ramayana in today's world? Rama was an ideal man, which was why he was called Adarsha Purusha. And he lived in a society where decadence was not as prevalent as it is today. Perhaps his wife's choice is suitable to that era. Perhaps Rama and Sita are too ideal for today's corrupt society.

Some people are of the opinion that conventionally, the male is always the protector and provider of the family while the female takes care of the child and the home. (Notice the word conventionally, this is not male chauvinist talk) It's not that women are incapable of doing things, it's that roles were defined. As time moved on and a wave of feminism swept across, modern women showed that they can do anything that a man can do. However, in India, the situation is very .... well, due to lack of a better word coming to my mind, I will pick curious. We have socially backward women, and we have too advanced women. On one hand, we have women who are being sold, burnt due to dowry, and on the other hand we have socialites posing with champagne. The rules that are formed to protect the backward women - such as dowry law, becomes an extremely dangerous weapon in the hands of the modern woman who has very often misused it. But one finds it hard to draw lines. The same holds true with a lot of rules such as reservation - which never seems to benefit the economically AND socially backward. This ends up being very unfair to others.

But enough of digressing there. Let me come back to the techie couple. So like I spoke man, woman and roles, it brings us back to the "power of attorney", the decision making power. Previously, when the man was the only bread winner, and being older, was making all the decisions. On the negative, he becomes like a dictator. On the positive though, the number of fights and clashes are minimum. Since he's older probably his decisions are more mature than the women? (Notice I said probably :P) And since only one decision making entity is there, there are no clashes. However, in the modern situation which everyone is familiar with now, there are 2 decision making entities. Both the husband and wife are earning huge salaries, each one independently can sustain not just themselves but also the children.

Therefore, there is no leverage with either to use on the other. The entire situation boils down to mutual respect, understanding and compromise. If you don't respect each other and don't compromise, and if you end up being stubborn, then the relationship just goes to the cleaners.

One very interesting argument I heard from one guy was his decision to marry a villager (or uneducated girl) because he felt that this way, he is creating the situation I described earlier - one decision making entity, no clashes. While it makes it seem very curious for a modern educated software engineer marrying an uneducated. I asked a couple of girls who said that they would follow the husband because they value relationships a lot more than jobs. It's not that they are going to be sitting at home, rather they will find a new job there because for them, the family is more important. At the same time, one conceded it depends on how hard the person has worked to get to that position.

In the end, the objective is to be happiest with the ideal combination of career and life. How you choose to do it is based on the mindsets of your spouse and you. But what's more important is that we try to imbibe the qualities of Rama and Sita into ourselves. The society is decadent, but at the same time, the society is made up of us. If we are good, the society is good. In the end, Rama and Sita are very much relevant - it's just that the tentacles of corruption has spread into each of us so deep, that we fear that we will be taken advantage of for being good. I believe more people feel that the Mahabharata is more relevant instead, since the decadence is far more prevalent in those societies, where brothers went to war over property!

We all become who WE choose to become. And that choice cannot be forced by anyone upon us. Think about it... How would YOU tackle the same situation? Vary the parameters and think how you would resolve it... 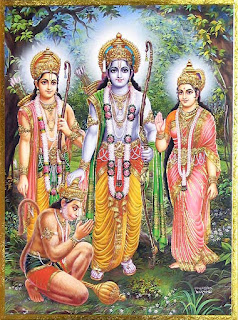