May 07, 2012
Baba Gyani Triviani said:
"Speaking of our spirits being balanced, I thought, can we use a spirit level to check orientation with electronics?"

I was just thinking about that spider camera in a cricket stadium and thought "How cool would it be if we had a bunch of autonomous flying bots in the air?" The crowds would be thrilled and it's just plain cool!

And as those thoughts were in my mind, I was wondering how you would be able to know the orientation of your bot? What if it was tilted and flying about haphazardly? And a comical image came to my mind - some guy keeping a spirit level on the bot to check if it is level. But then I thought - why not? What would happen if we have two spirit levels perpendicular? And by extension, a circular spirit level?

So I thought - what would happen if you have a circular spirit level, where the spirit is in reality some conducting liquid. And we have some kind of small electrodes into the unit at regular intervals along the border/circumference. And an electrode from the bottom which sends in some current. If the unit is perfectly flat, all electrodes will conduct. As the unit tilts, the bubble goes towards an electrode. The moment there is air at that point, the conduction at that electrode stops, and we know which direction it is tilted to. Simple right?

Maybe if we have multiple electrodes per node stacked one above the other having the unit relatively thicker, we can even have caliberation per tilt - as in, slightly tilted, more tilted, *code red alert* tilted! What say? Comments as to feasibility? Or does this already exist? Or how about having it spherical? That would be most awesome! 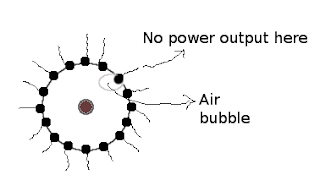