Desperately wanting to break out of monotony and also the need to give exercise to other parts of the body since ordinarily we are commited to exercising only our fingers (and occasionally our brains) drove us to go out for some physical activities.

Kabbaldurga was a random choice. We picked it after doing a very brief search on the internet. But there are a couple of factors that we took into account. Since we were climbing in summer we thought it should be a night trek - Climbing in the heat is really tiresome for those who are not used to. And we found some other reviews that said that they had climbed this hill at night. The night was a full moon one and this is very favourable for night treks for obvious reasons.

The place is located around 80 kms from Bangalore. You can find it on the map here.
View Larger Map

We hired a cab to the place. The reviews said that the hill was relatively easy. But it is not as easy as you might think. On reaching the place, we decided to climb it. There is a village at the bottom of the hill, which is sleepy at night, but bustling with great activity in the morning. The drive to the place is not more than 2 hours, we reached there around one AM. We saw a small piece of tilled land and what seemed to be traces of a quarry closeby. We knew there was one direct way to reach the top which is taken by pilgrims who want to visit the Kabbalamma shrine at the top.

But half of us were an adventurous lot. We had read in the reviews that there are four paths to the top and one is the "easy-peasy" path. We thought, heck, easy-peasy equals stairs, and if one wants to climb stairs, one can do it at home. Why go through all this trouble? So half of us decided to go by one of the alternate route while the clever ones decided to follow the tried and tested path. (yes, clever... why? read on)

Oh, before I proceed you need to have a look at the hill. So here is a picture for you. 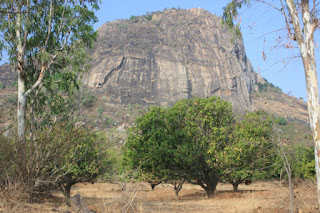 As you can see, most of the rock is vertical. I don't know what four paths they spoke of. Or maybe we didn't make out at night. So we decided to clamber over the brambles or whatever thorny plants normally like to grow in rocky places. We spent a lot of time climbing up and down, trying to figure out  the right path. Frankly, if you like to rough it out, trying this out is better than climbing conventional steps. You will end up with a lot of scratches all over your body if you are not careful. Also, be sure to protect your eyes. After several attempts of climbing and reaching vertical stone walls, and I mean repeatedly, we finally reached a place where our path converged with the conventional path. It was then that we found that the place is not as easy as we thought. We had already been spent thoroughly.

We eventually reached the top. Along the path, we also saw a medium sized scorpion. I was reminded of the Ballista from Age of Empires. One also has to be wary of snakes that apparently crawl out at nights, especially when the heat is quite high. Thus, one should carry a torch with sufficient brightness, preferably one that has a focused beam rather than a diverging one, since there is no point illuminating the bushes in general.

A couple of things to remember while climbing hills such as these:


Here is a nice little photo that makes it seem to us like the hills were swallowing the moon... Tilt your head to the right to see it. Click on the image to enlarge it. 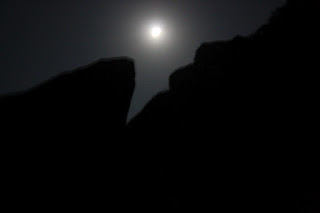 Overall a great trek. One that I would really recommend to adventure lovers. Also, it seems that it was supposed to be a fort...
Experience travelogue trek

Sachin Gowda said…
I have been to the kabbal temple many a times(today also!)
My native is Kanakapura only. But I dint know that people trek there at mid night! There are quite a lot of stories about the hill, kinda scary!
Brave boys :D
8 April 2012 at 23:59