Showing posts from October, 2011
Show All

October 28, 2011
Baba Gyani Triviani said: " I don't want a claw for a hand " Every time I think about the long hours of time spent by a programmer on the computer, I am reminded of the Chandler (from Friends) after playing Pacman (or Ms Chomp) where his hand becomes like a claw. RSI (Repetitive Stress Injury) and Carpel Tunnels Syndrome are two scary after effects of keyboard overuse. I had heard of the Dvorak keyboard quite a long time back, and I thought it is about time I use this. I know a couple of people who use Dvorak and I thought, I think it is time for me to try it out as well. How to proceed? One is to purchase a Dvorak keyboard. But I am not sure if I will be comfortable replacing the Qwerty. I mean, what if I lose interest after a few days? So, it is better to experiment with the existing keyboard and then if I like it, maybe buy one. So, I thought I should share whatever I found out with you guys to facilitate a switch. If you have some more info, let me know so that
Post a Comment
Read more

October 26, 2011
Swami Gulagulaananda said: " The underdog is always the one that gets support - irrespective of being right or wrong " For those of you who didn't get the title, there is a movie called Der Untergang (Which is a must watch, by the way) and this post is to do with the underdog. So, who's an underdog anyway? A dictionary would define it as follows An  underdog  is a person or group in a competition, frequently in electoral politics, sports and creative works, who is popularly expected to lose. One thing that I have noticed is that the public support, the mob support normally tends to go towards the underdog rather than for the powerful. The general feeling in the minds of the people is that the high and mighty, the powerful, the famous, the popular don't need any kind of support... Rather than saying don't need, I think it would be more appropriate to say don't deserve, for it may be right that they don't need. A simple example is in case of a
Post a Comment
Read more

October 26, 2011
Swami Gulagulaananda said: " A man without ethics is worse than an animal " In fact, animals have ethics. It is said that man is worse than the wild beasts of the jungle (or grasslands) because they hunt only for food and only when they are hungry. Many times, I used to be surprised while watching wild life shows when I saw gazelles, wildebeest and other animals on the menu of the predators walking and grazing just a few metres away from the big cats who are just lolling and sun bathing, looking lazily into the horizon. I thought, ' Aren't they scared that they may suddenly leap and bite? ' Apparently not. It is very clear to the grass eaters when the cats are hungry. At which point, they are in a state of alarm and quickly relay the message to the rest of their herd as well. The cats will hunt when they are hungry, and at other times, they are just yet other entities in the ecospace. However, in today's world, lesser and lesser people seem to have ethic
Post a Comment
Read more

October 26, 2011
Baba Gyani Triviani said: " Relationships are like friction - a necessary evil " Man is a social animal - one of the most cliched phrases. However, it is a fact. We live in a society. We bond with people, we have circles of friends, we have interactions with people in schools and colleges, at work, with neighbours and with random strangers. Some of these bonds are close and some are not so close, but bonds do form. Over a period of time, comfort levels increase with people with whom you interact a lot. This is specially true with people who move away from friends and family, especially for their higher studies or work. People normally fly to the US or to Europe or Singapore or Australia, and then end up talking to their parents and friends quite regularly. They repeatedly say that they miss their friends and family, and end up being quite lonely there. Why does this loneliness creep in? And when they meet their friends and family, they feel great again. Why? Bonds wit
Post a Comment
Read more

God, fate and destiny - A proof?

October 25, 2011
Swami Gulagulaananda said: " One cannot prove nor disprove fate and destiny - They are, thus, equivalent to God, or a parallel maybe. Everything can be God, everything can be fate or destiny... " Fate and destiny are very interesting concepts. When someone asks - Do you believe in the existence of God, the answers are one of the three. Absolutely yes, absolutely no, or maybe maybe not, I am not sure (Believers, Atheist or Agnostic). The reason for this is the lack of any absolute proof. One can give a long list of things that can't be explained, and one can give explanations with a thousand loopholes that are easy to find. A simple example was a brilliant show that I watched the other day which had Stephen Hawking explaining about the universe and how it all began. The show was very interesting, and Professor Hawking himself begins by saying that he doesn't want to offend anyone in the process - quite a way to begin, considering there are many who feel only thei
Post a Comment
Read more

October 22, 2011
Swami Gulagulaananda said: " Know when to stop, lest you shalt drop... For greed is innate " A very short story for you guys - an old one that I had read a long while ago. There was, a long time ago, a greedy money lender in a village. He was as rich as he was greedy. He was the richest man among all the villages around his village, and yet, his thirst for money was not quenched. He, therefore, chose a lot of underhanded methods to rob the poor who needed money to grow richer. He would lend money at very high rates of interest, and the poor who needed and borrowed could not repay, and he would cheat them off their land. He would also scam the illiterate into parting with their land. He was despised, but yet, he grew richer. One day, an interesting bit of news fell on his ears. A wandering mendicant had arrived to a forest near the village. It seemed that the mendicant had mystic powers that he had gained through years of meditation in the Himalayas. Now, he was ju
Post a Comment
Read more

October 13, 2011
Swami Gulagulaananda said: " When it comes down to it, your behaviour determines your character " A lot of people often make tall statements. But, unfortunately, when it comes down to it, when they have to act on their beliefs, most people chicken out. A lot of people have the bark, but very very few people have the bite to go through. When people are in some situations, they tend to make tall promises. A classic example is shown in the Mahabharata when Drupada made bold promises to his best friend, Drona, that he would give half his kingdom to Drona, a poor Brahmin, when Drupada, a prince, would become the king. However, when Drupada was crowned and Drona came to him, Drupada said that he didn't even recognise him. Au contraire, he even insulted him and threw him out. When it comes down to acting on the promise made, people often back out. People often say that the circumstances under which the promise was made and the circumstances at which they break it are di
1 comment
Read more

Steve Jobs and a million people 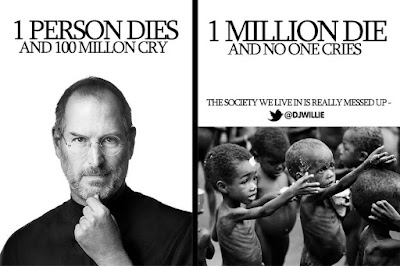 Swami Gulagulaananda repeated:  " You can't compare apples with oranges " Saw this silly poster making rounds on Facebook. This is one of the dumbest pictures I have seen... I don't really understand this poster. How can someone compare a man like Steve Jobs with some random dying people... If you want to do that, then nobody is great and worthy of looking up to. People die everyday. And those people are somebody really great to their family and close ones, but to the rest of the world, they are nobodies. However, once in a while, some people who touch the lives of lakhs of people come around. These people end up being role models to a lot of people. Steve Jobs may not have fed hungry African children, but his achievements, ups and downs, and vision have inspired lakhs of techies and students. If you want to compare a great like Jobs to a hungry kid in Africa, then you will have to erase the very concept of great people and say that every man is equal. Nob
1 comment
Read more

October 06, 2011
Swami Gulagulaananda said: " Ah, I am still master of my own domain... *chuckles* Seinfeld was always funny " This is my 200th post, and I wanted something special to be written in the 200th post! So, here it is... I finally got my own website. Frankly, I don't know what I am going to do with it - But heck, it is fun to say "Go to my site" :-) So, I thought that the very first thing I should do is have a sub-domain for Artistick, like most of the other webcomics. Yes, I do know that I have not done much towards Artistick for quite some time now, but that's not going to be true for long... So, here is the link -  http://artistick.nikhilbaliga.com/  - Check it out. More things will come on the site soon! Visit Artistick!
Post a Comment
Read more

Screwing with people with factual statements

October 02, 2011
Swami Gulagulaananda said: " You can tell the truth, the whole truth and nothing but the truth to mess with people's lives " Here is a funny scenario that you can assume to have happened. There was once a review meeting. And, in the review meeting, the reviewer told the superiors " Well, today Raj has come to office without drinking ". What are the repercussions? The superior will naturally think that Raj is a guy who drinks and comes to office habitually, and today happens to be  a one-off day where he has come to office without drinking. Raj, in reality was a teetotaler. And this statement told by the reviewer is indeed factually correct. And yet, the superior takes it in the wrong sense. Is the superior wrong? Not really, because normally, we tend to read between the lines, and draw conclusions because we hard wired to think in those lines. Like, if you talk a lot on the phone, and get less marks, parents would put two and two and make five - You talk
Post a Comment
Read more 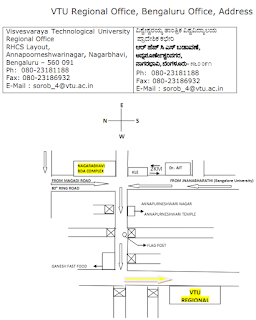 Baba Gyani Triviani said: " VTU - Expect the unexpected " Those of you who need VTU transcripts will find this post useful. Previously, you could obtain them from your respective colleges, but now, you have to go to the VTU regional office, Bangalore. Before going to the VTU Regional Office, please ensure that you have the following: Photocopies of marks cards of 1-8 semesters A DD in favour of Finance Officer, VTU payable at Belgaum. Rs. 250 for the first copy and Rs. 150 for subsequent copies. Fill out the application form that has to be downloaded from the VTU website. A direct link to the PDF is here . Download it, take print outs of them. The first page also shows the information mentioned above. Where is the Regional Office? The VTU Regional Office is not as easy to find as I thought. Your starting position needs to be Dr. Ambedkar Institute of Technology (Dr. AIT) college, Nagarbhavi, Bangalore. From there, go straight towards BDA complex / KLE scho
8 comments
Read more
More posts