Installing Gnome3 and a couple of tweaks

September 25, 2011
Baba Gyani Triviani said:
"Life is always a trade off - You get something, at the cost of something else"

Ubuntu is probably the most commonly used Linux distribution. Ubuntu used to be shipping with Gnome for quite some time; however the latest version had Unity. While Unity appeared to look quite fancy in the beginning, a couple of sessions later, I found it incredibly annoying. There are several annoying features that one can find by running a simple Google search.

However, there is an alternative - Gnome3. Some people may prefer KDE for the beautiful environment considering it is quite familiar, being similar to Windows; Gnome though was my personal favourite (Though Linus Torvalds hates it) for being minimalistic and doing the job right. So, I decided to install Gnome, and found they have a new version Gnome 3.

[Note: From what I understand, you will lose Unity for good - Point of no return]

How to install Gnome 3:
To install Gnome 3, first launch your terminal. Then type the following four commands. As you would have probably guessed, this requires an internet connection.

Reboot your system and choose Ubuntu Gnome Shell Desktop at the login screen.

Issues and Fixes (These are some issues, and the resolutions)
After doing this, you will find that the Gnome 3 is up and running smoothly. However, the following are some issues you may see... Don't worry, there are very simple solutions too.

No shutdown option! Or is there...?
So, after installing Gnome 3 and using it, I wanted to shut down my system and I found that there was a Suspend option but there was no shutdown option, nor a hibernate option in the drop down menu on the top right where it was always there. I had to log out, and then at the login screen, press on the power off button from the top right. This was most annoying - Why should I do something in two steps when I used to do it in one? I then started running the command

I then found that you can shut down without logging out. When you click on the menu on the top right, keep Alt button pressed. On doing that, you will see that the Suspend button becomes Power Off...

But, how about Hibernate?
If you are like me, you keep a few windows open, and want to resume work the next day. You won't want to power off, and open all of them all over again. So, yeah, Hibernate. But, there is no Hibernate right? To achieve this, as well as fix the previous issue also permanently, you can do the following.

Open the terminal and run the command

This will add a Power Off option to the menu. And on pressing Alt key now, the Suspend button becomes Hibernate. Easy, no?

Icons on Desktop
Another issue was that icons on the desktop are disabled by default. To solve this, as well as to get control over a lot of things, install dconf-tools. Run the following command in a terminal.

Then, launch the dconf-editor by pressing Alt + F2, and typing in dconf-editor and press enter.
In the window that opens, go to org > gnome > desktop > background and check the box to show desktop icons.

That will get you the Desktop icons back.

You can remove some of the default icons that appear by going to org > gnome > nautilus > desktop and unchecking the icons that you don't want.

Did you know: Windows button + D will minimise all your windows, or restore them - toggle

Do you spend a lot of time on the computer? Click here to learn how to use the Dvorak keyboard
Maximise and Minimise buttons?
The windows don't have a minimise and maximise button by default. Let's proceed to fix that. Open the Terminal and run the following command

In the window that opens, navigate to Shell in the panel on the left, and then in the Arrangement of buttons in the title bar option, choose All.

You can then press Alt + F2, and typing in r and press enter.

I hope you enjoy using Gnome 3... Well, I did. Read about the various features of Gnome 3, and you will discover quite a few yourself.

If you are a big fan of the Mac OSX dock, which most of us are, then Docky can be an excellent app. Not only is it as smooth as the Mac one and does everything exactly similarly, it also serves as the much missed task bar to which most of us are used to. A beautiful app, a definite recommendation. 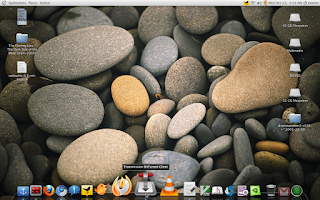