May 24, 2011
Swami Gulagulaananda said:
"You can NEVER alter the past to correct the future - Live your present wisely"
Time travel is a very interesting concept. I had earlier written a different post regarding Time Travel, to see if it was possible. You can read it here.
Time Travel and Fate
Now let's analyse it slightly differently. Assume Time Travel is possible. Assume I make a time machine and I decide to go back in time to save my girl friend who died in a car crash. Now what happens to the current time frame? That does not stop, and continues to move ahead. I moved back in time - and let us assume that some how I prevented her from going in that car, and thus saved her... Now what? Since I altered the past, the current time frame (before time travel) should continue to move ahead without her. But since she is alive in the past, a new thread should spawn from there on. 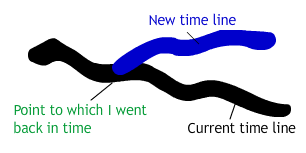 However if you are a person who believes in fate, then "What has to happen, has to happen" no matter what you do. So, if she was destined to die, she will definitely die around that time (may be a little delayed, may be a little later - the skewing happens because of interference I guess) so quite soon, the two time lines should meet and continue as one again.

Imagine that I made more than one changes - Then, the changes get undone in some way or another such that after some time, all the lines match with the same current line and continue as one again. Meaning, if I saved a girl, killed a terrorist who wanted to bomb my college and jumped a signal - My college might end up getting blown by a different terrorist, and I might get fined for riding without a license - What I am saying is that "What had to happen -" the getting fined and college getting blown up will happen by one way or another... essentially saying that Karma will prevail across time lines, and end up merging all time lines...
Note that this is very much needed - because in the time that I am not in the current time frame and gallivanting in a parallel time frame, where am I in the current time frame? That is, I have to return some time later to ensure there is no imbalance because of my absence.
What if no fate?
Ok, the previous discussion was based on the assumption that Karmic philosophy works and will forcibly merge time lines. What if that doesn't happen? Meaning, what if the girl I saved from the car crash doesn't die any time and ends up marrying me and us living a happy life for the next forty years? So that would mean that a new thread is created and sustained.

Infinite instances?
Going to the future should mean that the time lines are pre-drawn and we are merely going according to it. If you manage to go to the future, there would be another instance of you there. Which means, at every time instant of the future you go to, there will be one instance of you there - which would mean that there are infinite instances of you in the future - and the same should be true about the past. So if you were to look at it from God's perspective - we are all animated characters, with our actions prewritten like an animated character's time line. What action I am doing right now, my instance of the past is going to a little later, and my instance of the future has already done it... and this should happen infinitely. 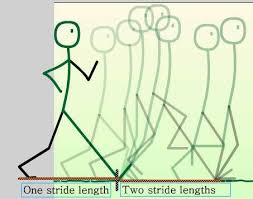 So if this is true, then if I go to the past - and change something at a point of time... From that point, a new instance thread should get created - Now an interesting problem arises. If I go to a point even earlier than this point to which I went to... That is, let me call the first point as A, and the new point as B as shown below. 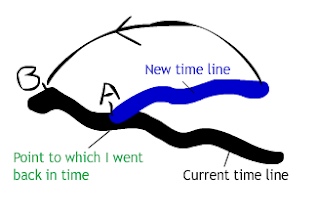 Now, from B till the point A, we continue in the same Animation Timeline type behaviour. Assume no changes were made, and life was lived normally (Although remember that there is another instance of you all the time co-existing - and you are again creating copies of yourself across all these instances). When we reach A, which time line gets selected? This is going to be a big problem.
So, to avoid this situation, the moment I go to B, another thread should start off - Which basically means that everytime I go to the past, new threads should keep getting created each and every time. So you can NEVER alter the past to correct the future
And will only end up creating whole new dimensions each and every time. This will mean that a lot of resources are getting consumed every time this is done - and if done beyond a certain number of times, the universe will implode :P Out of memory exception
***
You may also like...
Time Travel - Possible?
Observation

Anonymous said…
Think about the alternate timeline as not so much being created, but pre existing, meaning your time travel hasn't split the timeline, the split was always there. So what you've done is travelled back to a bifurcation point in history.

It would probably end up looking something like this.

Now think about what you've just seen, because It's actually (in a very roundabout way) a form of predestination, because out there in the multiverse there would need to be enough alternate universes that concurred with .any. changes that you or anyone else could .ever. want to make. Want to go back to 1945 and play the bongo? No problem, Out there is another 2011 where in their history books a strange man claiming to be from the future appeared in 1945 an decided to play the bongo. That man turns out to be you. And if you don't go back, then no problem, because there a is another 2011 just like ours where another you decides to go back and play the bongo. And so on and so forth.
18 August 2011 at 23:19

Well, according to your theory, infinite parallel universes exist. Personally, my small brain finds it very hard to comprehend infinity. The moment you say infinity, it opens the world to limitless (no pun intended) possibilities. Although I did consider infinite cases, I didn't see it the way you did. Nice one :)
19 August 2011 at 00:25

It's a cool animation I know, the problem is it's based on the block universe theory, but in this modified theory there are multiple 'blocks' of time. The problem I have is that...... I don't really agree with the theory.

I know, that long post, all those words, for a theory I actually disagree with :-P ;-P

The bit that racks my brain and makes me think traditional backwards time travel is probably impossible is the bit during the animation where the same guy is at two different places at the same time :-/ :-/

A much simpler way of using the multiverse is to say that you move across to a universe where the present day .is. 1945 Either because the because the Big bang happened 66 years later than ours or that time is running slower there relative to us.

So you could say that 1945 really is the present over there. The only problem is that there Isn't really any time travel going on here (why people generally dislike this take on the multiverse theory)

Swami Gulagulaananda said…
The reason I don't like the theory you mentioned is that each person is capable of doing so many things. That multiplied by total number of people would result in really really large number of possibilities.

Meaning, assume a person in a situation can take either one of two steps, A or B. So, two universes should exist, one where he took A and one where he took B. After each step, there will be a million others possibly depending upon the course he took. And all this is for one person. Which would mean that the universe is really infinite. Which is difficult to digest.

'Slaps own wrist for making such a rookie spelling mistake'

Yeah, the multiverse theory is a complicated theory to get my head around.

There aren't really an infinite number just (in theory) an incalculably high number of them.

I think based on David Deutsch's theory there would be about, well, basically take 10 and add 500 zeros, and that's at a .very. rough guesstimate how many other universes there could be. Based on his theory worlds aren't splitting but other pre existing identical universes are diverging away from one another. Here, universes are being created all the time, separate from each other, it's kind of like natural selection for universes where some have the right conditions for life as we know it, but others may not form properly or collapse back down on themselves in the early stages.
19 August 2011 at 20:09