April 04, 2011
Baba Gyani Triviani said:
"Entanglement is one of the best games I have played"
Gopherwood Studios have come up with a brilliant game - Entanglement. The beauty of the game lies in the simplicity of design and the fact that you will never stop playing it! 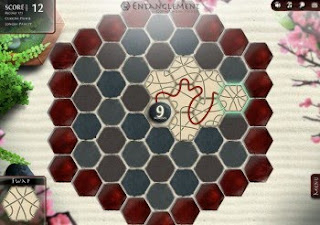 Objective
You have a hexagonal board (by default) and have hexagonal tiles that you have to place within. The tiles have small paths etched on them, and you can rotate the tiles clockwise or anti-clockwise. The objective of the game is to create a path out of the tiles. Each time you place a tile, a little red streak goes through the path. You have to try to make the path as long as possible...
But don't be deceived into thinking that it's trivial. The game is quite hard, for pretty soon you will run into all kinds of dead ends. Every time you place a tile, you should not only be thinking of your way ahead at that instant, but also should try to create multiple paths in parallel that can be used some time later. It's these parallel paths that are harder, because your tiles will not always be conducive to form that path you had in mind. But fret not, there is one extra tile that you have that can be used to swap with your current tile.
Theme and Music
One of the best features of the game, apart from the game itself, is the theme - The screen looks extremely beautiful, and relaxing if I might say so. The graphic design is excellent, with the border walls looking like polished stones and insides having rougher stones. There is a small pebble at the centre and the whole board is placed on fine sand with some plants at the edges. The theme essentially seems Japanese (and is Japanese as well) with an excellent score being played in the background. The menus and dialog screens that appear have the characteristic Japanese styled roof (buffalo horn shaped)
I just love the music!
Cost
The default game is completely free of cost. Play the default version and see how addictive it is. There are other screens available, with a variety of puzzles and board shapes, that have a very nominal cost and are definitely worth trying. So, I strongly recommend buying the game - After playing the default version, there is no doubt that you will buy it!
Chrome Appstore
If you have Google Chrome, then you can install this as a web app and play it offline as well. To do that, you should have one of the latest versions of Chrome that supports the app store, and here is the link to install the game.
Quicklinks
Gopherwood Studios - The link to the home site
Entanglement - The link to the game
You might also want to try
Clickomania
Review

Anonymous said…
It's a great game, Chrome was doing a showcase/spotlight on it and I tried it once, failed immediately, realized the premise, and lost 4 hours.
22 May 2011 at 01:07