"Almost everything that an average person does, is based on the cool factor..."

People do various things for various reasons - money, fame, goodness of their hearts... but there is one thing that drives most people - perception, what others have about them... This is something that I like to call the cool factor and you may already have other names for it. Coolness is the generally perceived notion of a certain activity or quality, and if more people think it is cool, the stronger will it stick and harder it is to remove. 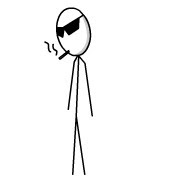 Now, let's start off by taking a simple example. In the picture on the left, Actor (Guest Character) from Artistick is standing in one of the most typical poses that is normally shown in movies - As you can see, there is a quality in him that makes him look really cool. One, the "cooling" glasses, two, the slightly bent head, three, no smile and four, the cigarette.

Whether you think of it as cool or not is immaterial. I am just pointing out to what we have made to be cool. That is, our mind is tuned to quickly pick out these qualities and tag it as cool. There is no logic that is used here - It is hard wired. Our minds work around these stereotypes all the time!

Like I showed in the picture above, the cigarette goes really well with the ensemble. However, in reality, cigarettes are hardly cool. In fact, I consider them as disgusting, life threatening - Everyone knows why, so I am not going to go on a rant there. Same goes for alcohol. And yet, people continue to do it. Whether they do it for the jollies or the coolness is the differentiating part. Those who get sloshed till they puke on themselves or pass out in bars, and the chain smokers are not among the "cool dudes". It's the rest of them, who say that they are trying to 'destress', but more often than not, subconsciously feel that they are cool. They get a kick, not out of the cigarettes nor the drink, but from the fact that they are doing all the cool things that they saw on TV - exactly like that, like the mean ass movie stars who just beat up the villain. 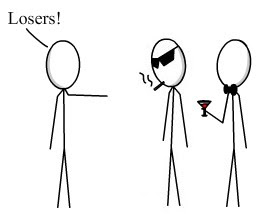 This kind of emulation is dangerous - It is because many people do it only for the cool factor. This cool factor is decided by the society. If the society does not shun you, then it is considered as acceptable. Therefore, if you are really serious about getting rid of social evils, and that includes smoking, drinking, speeding and breaking rules, then you should nip it in the bud. The next time you are with your friends, and one of them decides to light up, openly criticise it. Don't sit quietly because you feel that he or she might be offended. This is because you know it is wrong. Yes, they may feel that you are exceeding your brief by telling them what not to do, but you can try, if he or she is close to you. And this has to be a group effort. When people refuse to hang around you when you are smoking, and consider you as unsociable at that moment, you will start feeling like an outcast.

Of course it will! If you watch Friends, the popular sitcom, you will see how Chandler's friends make it seem disgusting every time he lights up, and force him to put it out! It works... Always... Similarly, spare some time to watch this beautiful ad, which shows all the ill-effects of speeding, and towards the end shows how people make the people who speed and show off with their vehicles seem uncool - Watch the video

People will continue to do such things - If they are addicted, or if they think they are cool. Addiction is a serious problem and needs proper care. There are various centres for deaddiction. However, the people who do it to seem cool can be cured easily by removing the perception of coolness - Live a clean life, and live it with dignity! YOU might think you are cool but nobody else thinks big of you

You may also want to read...

Mac Nirmal Lobo: Welll you are forgetting the significant addiction factor in cigarettes

Srivathsan Lakshmipuram: Oh dude I know man! It's like if you don't booze and smoke, you're some social outcast! It should be the other freaking way around!

Arvind S Murthy: ‎"An ounce of prevention is worth a pound of cure" so instead of thinking of deaddiction the best thing is to not start at all..Coz nipping in the bud is not easy..

Subramanya Adiga: Proud to be a teetotaler :-)

Nikhil Baliga: ‎@Mac - I have not forgotten. I have said that addiction is an issue and needs to be handled carefully. I am talking only about the "cool" factor

@Arvind - You are right :-) But if a person wants to be accepted or wants to seem cool, then he will do it. It is only a rational person who is able to weigh consequences and decide it who will not start