How Media Messes With Your Head

March 10, 2011
Swami Nikhilaananda said:
"Often, partial information is very dangerous... And what's more dangerous is misrepresentation of facts"
Ok, it's been quite a while since I have bitched about Times Of India being immature. So, here I go... But before you think that this is yet another rant, let me tell you that this is just a case in point and that the same is applicable for any means of mass media of any brand.
The following is a snapshot of today's TOI front page article. Just read the first line and you will know what I mean. 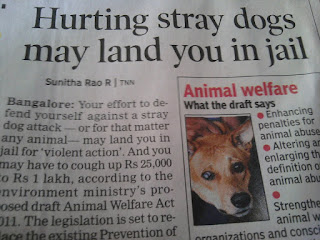 (Click on the image to enlarge)
The first line starts off by boldly making a statement that "your effort to defend yourself against a stray dog attack - or for that matter any animal - may land you in jail for 'violent action' "...
Notice the word *Defend* that has been used, not attack. It is understandable that you are penalised for an unprovoked attack on a dog that was just sitting by itself, minding its own business.
But the word defend inherently means that you were attacked first, and it is illogical that you are not allowed to defend yourself... What are they trying to say? We should just try to run and in case the dog bites us, try to convince the dog to not bite us (or perhaps try to distract it with a bone? Good idea...)
It's totally stupid and nonsensical. And if you think what's the newspaper's fault here, let me explain. People who shoot and kill people in self defence are pardoned. People! And pelting a stone at a dog is not? Ridiculous... Either full research has not been done, or people at TOI need a refresher course on their vocabulary (and perhaps a free copy of Roget's Thesaurus and Oxford Dictionary each)
Imagine what happens if you give misleading information about something a little more serious and sensitive than this? It can lead to a lot of problems (You guys can think about it - assignment for today)
Artistick goes on to give you a small cartoon on how media can mess with your head with selective information in this cartoon...
-----
You may also want to read...
Rant