Earth Hour - Why it is useless

March 23, 2011
Swami Gulagulaananda angrily shouted:
"World Earth Hour is a sham, and I refuse to be a part of tokenism. I will continue to propound aggressive pursuit rather than an hour of foolishness"

World Earth Hour:
A marathon movement started by WWF (Not the wrestling federation) to generate awareness about environment by turning off all your electrical appliances for an hour on a day in the year.

Tokenism (as defined by WordWeb)
A policy of formally complying with efforts to achieve a goal by making small, token gestures; especially to hire a minimal number of ethnically diverse or disadvantaged people


Swami Gulagulaananda's view
The world is rapidly progressing, and with progress, people are getting richer and can buy a lot more things than people could before. I remember, as a school child, that an air conditioner was a big deal, owning a two wheeler wasn't very common and owning a car (White Ambassador or a Fiat Padmini) was considered as being rich.

But fifteen years later, I see that the world around me has changed vastly. Owning two cars also is common, people have many vehicles at home, all air conditioned, and have air conditioners at home as well. And the cars? You know the fantastic range of vehicles that are available, and people can *afford* to buy multiples of those.

Do we understand what we are doing?
People were not very environment conscious before. They are now... And some times a little too conscious - and not in the good way. Why? It's because they don't understand what it is to be environment conscious and do weird things because someone else is doing it. Let me give you a simple example... Vehicle idling - It is one of the main sources of pollution. Vehicle idling is keeping your engine running while waiting at a signal. It is annoying to see vehicles unnecessarily wasting fuel, polluting the environment and blowing smoke into other people's faces. So, consciousness was spread by asking people not to idle their engines. They also introduced timers in signals to facilitate this. Now, you will know how long you have to wait, and there is no point to idle your engine anymore. While this may seem to rid the problem, a lot of people don't know a fact - Starting a vehicles consumes a lot of fuel suddenly, compared to running. So, you should shut your engine off, only if you are waiting for more than 60 seconds for a four wheeler, and more than 30 seconds for a two wheeler. But overzealous people shut their engines off simply when they see red lights, only to turn it on within a few seconds. In the process, they are damaging the environment more than helping it.

The point from the above example that has to be taken home, is that a complete understanding of what and why needs to be had, before doing anything... Just doing an act for the heck of it, will not benefit anyone anyway.

Come on, Earth Hour is all about raising awareness 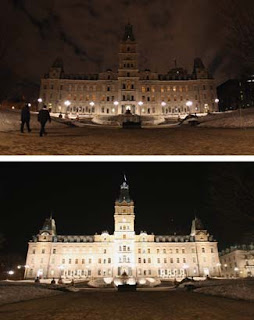 [Caption: The Quebec legislature, during and after Earth Hour 2009. (Jacques Boissinot/Canadian Press)]

<-- This pic shows what kind of hypocrites observe this event The strongest argument that is made by people who are pro Earth Hour is that it is all about bringing about awareness. "Hey, it's not all about the amount of energy saved in that one hour. It's a gesture - It will make people aware of it."

If you are a person who believes that the amount of power saved during Earth Hour itself is significant enough, then I am not going to argue with you... I don't want to waste my breath...

However, if you are a person who believes in the argument of gesture, then let me tell you this - I will give you another example. There is a very famous proverb when it comes to Democracy, and that is "Public memory is short." And what this means is something that is known to everyone. A politician does a scam, and media creates a hullabaloo about it, people start tweeting and blogging and going on campaigns. Some time later, everyone forgets everything... and the same politicians win by huge margins. How is that? Why is it that the blogging, tweeting and huge media ruckus didn't leave any impression on the minds of people?

And this can be extended to anything... Ragging is a great menace. People die, sad photos of parents are shown, two students get thrown out, jailed even, people stand around lighting candles... Then boom. Shortly, we read another incident of ragging.

It's all about Momentum
Why is it that the polio movement in India became a huge success? The reason is that the Government did not tell one day "Ok, people, get your kids to the polio booth and get vaccines..." and then leave it at that. They aggressive pursued it. They kept on saying "Polio booths are available, go there". Doctors and volunteers actually went door to door and urged people to get their children vaccinated. And it worked... You have to aggressively pursue something, and only then it will have an effect. Not doing something one fine day, and then leaving it after that. They didn't do it for a week. They did this all round the year.

And this can be anything else. Anything else, includes power saving and concern for environment. Imagine you want to get six pack abs and bulging biceps. So, I go to the gym and aggressively work out for an hour, two hours maybe? And then rest of the year feast on cheese burst pizzas. Will I get my abs?

What should I do then?
Now we arrive at the right part. It's not about bringing awareness on one day, and forgetting about it. We need to aggressively pursue this.

Steps you SHOULD follow:
Read a pre-Artistick cartoon and reduce energy consumption 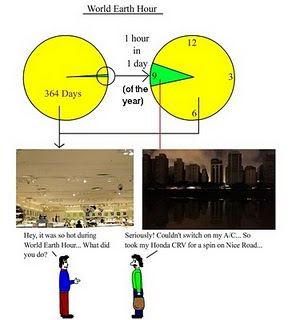