Everyone watches sitcoms - of some kind or the other. Personally, I love jokes which involve wit and sarcasm and I hate jokes that have slapstick and goofy behaviour. And among sitcoms, I love the shows that have characters that grow on you - The characters become like people who are around you, and you feel the pain when there is a break-up and joy when they make up, all the while making you laugh... So, the following are my favourite sitcoms in no particular order. 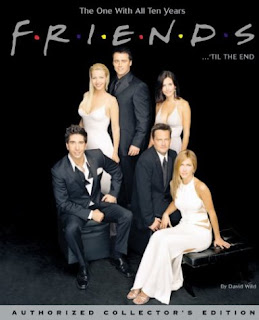 Most of you would have guessed this as the number one show - Friends is my favourite show and needs no introduction. Rachel, Monica, Phoebe, Chandler, Joey and Ross - These six characters have the largest fan-base without any doubt. Spanning across 10 seasons, you will feel these characters around you - and associate several parts of your life with scenes from the show. Therefore, this is ranked number one, and the remaining shows are in no particular order :-) Every character is equally important in the show and Friends is always considered the ultimate show ever! I have no words to describe this...

P.S - If you have not watched Friends, watch it now. After watching it, if you are not impressed, please do let me know. Every single person who has watched Friends has become a fanatic. Incidentally, people keep comparing their friends to characters from Friends

A brilliant series involving Charlie, Alan and Jake along with a host of side characters, Two and a Half men is about a rich jingle writing womaniser (Charlie) who loves to drink, gamble and have sex. He owns a beach house at Malibu, a Mercedes and a very resilient liver. His brother, Alan gets kicked out by his wife and ends up living with Charlie as a mooch. Jake, Alan's son who is cute in the beginning, becomes an annoying teenager who loves to eat and poop in no particular order and is a person with an IQ lower than a monkey. Alan and Charlie's much married mother, Evelyn is worse than Satan (but a delightful character in the show). And there is Bertha the housekeeper and Rose, Charlie's stalker... A fantastic show that grows on you with time.

The show about nothing - The beauty of Seinfeld is that the characters are so annoying, you will love to hate them. While Friends will make you pray that you had friends like Friends, Seinfeld is the complete opposite. Jerry Seinfeld, George Costanza, Elaine and Kramer are the lead characters of this show. While George is a short, balding miserly loser who keeps getting into the weirdest of situations, Kramer is the most unconventional character you can come across. Seinfeld, a stickler for cleanliness who is a stand-up comedian has these two as his friends along with ex girl friend, Elaine, intelligent, gorgeous and loose. Seinfeld has a fantastic theme - Nothing! That's right, each episode is made around nothing in particular, and yet, is brilliantly weaved that one person's individual thread will end up messing another person's life... It's a comedy show of an entirely different genre - While some hate it, many including me simply love it.

While I particularly don't rate BBT very highly, it seems to be quite popular. A story that revolves around four nerds and a very pretty girl, BBT is not particularly funny. But it will definitely put a smile on your face. The characters are very interesting - Sheldon Cooper is the most popular character and is the only character mentioned when someone talks about BBT (apart from the gorgeous Penny - the pretty girl). The other three nerds includes an Indian who cannot talk in front of a girl unless he is drunk (which will make him a casanova), a perverted Jewish guy and a seemingly normal guy. These nerds love to play video games and know a lot about comic books. Penny, on the other hand, is an average American. And the show goes on, involving complex jargon for simple phrases, twists in romance and Sheldon's unique style, BBT is a good show to watch if you don't have anything else to do.

The longest running cartoon series, I believe... Simpsons is a really funny show, again, of an entirely different genre. The beauty of Simpsons is not just with the comedy involved, but also things that range from weird things happening in the background, or rather completely unexpected things happening. Simpsons is a tale about the Simpsons family - Homer Simpson, balding bungling clumsy moron who loves doughnuts and beer, and yeah, his family, his wife Marge with funny blue hair that can hold a lot of things in it (Like Uncle Fester's shirt and cousin It from Addams Family), the maniac son Bart (best way to describe him is an anagram of his name), daughter Lisa who is intelligent and seems normal, but has her own quirks, and baby daughter Maggie who does nothing more than suckle on her pacifier. And a host of characters from the town of Springfield - Everyone is yellow in Simpsons :P But hell, it is one of the best shows you can watch...

Other notable animated sitcoms are South Park and Family Guy

6) How I met your mother

A show involving the lead character telling his kids how he met their mother... essentially the whole show is a flash back in concept. A very nice show involving Ted, a very good looking man who is the lead character, Robin, an extremely beautiful Canadian woman (who everyone has fallen in love with), Barney Stinson, the man with the bro-code (Google search this) and Marshall and Lily, friend who eventually get married. HIMYM is the popular acronym for this, and is very popular among people who watch it. Quite a lot of them, however, start getting bored with the series saying that it is monotonous.

A very nice series, My Wife And Kids is a family comedy show. A very pleasant show indeed, and is reminiscent of series like Full House. My Wife And Kids is about Michael, a handsome bald man and his family - wife, one idiot son and two daughters. A very cute show, it doesn't have any words that is not 'child unsafe.' And yeah, like many shows of this genre, there are many morals and lessons that are taught, such as importance of family, understanding, trust, relationships, anger etc.

A show about a bunch of teenagers based in the '70s, with an annoying old man and his wife, their son and his girl friend and other friends... That '70s show is one of those shows that are better watched than described. You will mostly like the show...

Scrubs is a very funny show liked by a lot of people - Again, another show that is unconventional according to me. One of those shows that is better watched than described. The show mainly revolves around a bunch of medical interns, with romance and weird patients... not to mention wacky doctors. It's a really funny show to watch (and equally scary to imagine such people in hospitals).

Apart from the list above, I have some random shows that you will like - Cheers, Fresh Prince of Bel Air, Everybody Loves Raymond, Just Shoot Me, Coupling and The Office.

Most of these shows used to or still come on Star World and Zee Cafe.

Results of poll taken on this blog