After a certain prank that was played on me recently (If you have not read it, read it here), and so, I decided to pay him back in his own coin. I also wanted to show others who laughed at me (calling me a fool, of course :P) saying that I was dumb to get tricked.

So, before I proceed to how I decided to play back, let me put a short analysis here.

So, why did HIS plot work?
I had told Mr. X about the different mails I used to get from various people, how they would send screenshots and how people appreciated the fact that the product was given for free. He wrote his first mail incorporating all of these - Now, since I was already getting various mails in the same syntax (if I can call it that, or format, if you must) I did not suspect anything.

Some people asked me why I didn't suspect when the person lacked a "social circle" - that is, no online profiles. Several of my friends don't come online at all! That doesn't mean they don't exist. And come on, who will go looking into their university websites if they exist...

The difficulty lies only in the first phase. As you can see, once the conversation with the fake person is established, continuing it is a cinch.

Just to prove these points, here is what I did.

My comeback - modus operandi
I created a fake profile on facebook - a girl called Pallavi Ramamurthy. I filled in all the details (fictitious, of course) and put up a photo (some photo I picked up somewhere) and put up photos of her trip with her friends to Hogenakal Falls. I also shared varopis videos, links, etc.

I created another fake profile called Harish Krishan, and did the same. I created another one called Ravi Krishnan (who is Harish's younger brother) I made Harish and Pallavi to be committed. Harish and Ravi started a blog as well, and so did Pallavi. They also started commenting on each other, having a conversation.

But, just by doing that, nobody will fall for it. So, how to proceed? I asked some friends of mine (juniors) to add this fake profiles as friends. Then, once I had around 8 friends, I started sending friend requests to all the suggested friends by facebook - Facebook helped me a lot by showing me all the relevant people based on mutual friends. All the juniors simply added me without any verification

Pallavi got 100+ friends in a mere three days!

This proves that playing pranks on people is not at all difficult over the internet.

This talks about human psychology
Most people seem to accept people on facebook, just because others know them, although they personally don't know them. Believe it or not, just around 6 people asked me if they knew me. Apart from them, and apart from those who were told it was me, every single guy simply added the fake profile simply because 20+ friends of theirs knew Pallavi/Harish and they had no reason to suspect it - and EVERYONE of them thought in the same way.

Not only this, I got friend requests TO this fake profile!

What next?
I started asking certain legitimate questions, posing as a junior to some seniors (my batch) and I got positive responses. You see, they didn't suspect me and started answering my questions.

There is nothing left to do after this... I can continue talking, asking questions, say that it is easier to chat rather than exchange messages, promise to remove myself from their list once I am done asking questions, send them friend requests, and I am in. After that, it is a mere question of building a relationship over a period of time, posting comments, liking statuses, liking and commenting photos, calling them handsome :P (Guys fall for it, you know) and bamm! Then Pallavi and Harish can break up because she starts falling for the victim, or it could move in any other direction...

My point is singular - Once trust has been established, just like once a parasite is done entering the body, movement in any direction is a matter of personal choice.

That being said, I am shutting down the profile in two days - My point has been proved, and I can say that I am not an idiot :-)

Conclusion
Now, for the rest of you people who are reading this and have accepted the request (or who accept requests based on the principle that some other people you know know them and you don't, think again. Another thing is that, if you believe that this trick would not have worked without the juniors who were definitely very instrumental in this, don't think like that - You see, there are many people who simply accept every request they get. If I get a few people of this type to add also it will work - It is not very easy, but with persistence, everything can be achieved. We need to start relooking at the way in which we interact over the internet. The internet is an anonymous medium, and you don't know who is at the other end of the wall. Therefore, even when interacting with friends, be careful - A scamster could be lurking around.

Why did this trick work?
The trick worked because the response time was very low (within a day), familiarity existed, both in situation as well as in people.

Why am I revealing this so soon?
Frankly I have neither the time nor the patience to pull it for a really long time. I just wanted to prove a point :-)
No way this trick would have worked!
My friend Karthik Rangarajan has provided a link [Robin Sage experiment] after reading this post where something similar was done. See how many people got fooled after one month, and they were not ordinary people, mind you.
Some screenshots (Click on images to enlarge) 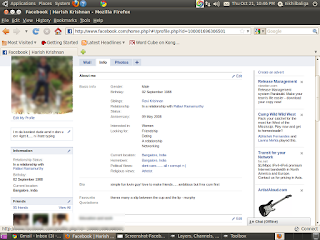 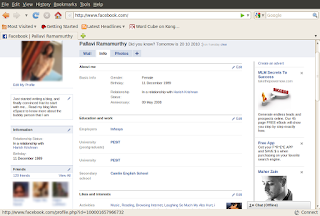 Karthik Rangarajan said…
"Getting into bed with Robin Sage" by Thomas Ryan, presented at Black Hat 2010.

Swami Gulagulaananda said…
Frankly I can't comment on that Anup. The reason is that you were not an intended recipient. I tried sending requests to some random people. The main targets however had mutual friends but you had only me as a mutual friend. If you had some ten friends maybe you would have accepted :-) so as of now I'll say Insufficient Data
22 October 2010 at 14:44