Media - Not liars, but selective truth-tellers

September 29, 2010
Swami Gulagulaananda said:
"A half truth is often more dangerous than a whole lie"

The Indian media is becoming more and more aggressive with each passing day. In the Kargil war, it was said that the Indian media was largely responsible for boosting the morale of the Indian soldiers, which was a key factor towards Indian war - Something that was apparently missing in Pakistan (Source: Wikipedia - Kargil War)

The media went on to fight for justice in the Jessica Lall case. However, by then, the media started going off course. While the media was doing a good thing in fighting for a cause - where many cases normally get buried due to the influence of the rich and powerful, many journalists including Karan Thapar and Sagarika Ghose started showing signs of prejudice (and stupidity, with all due respect) which can be clearly seen in these videos - Karan Thapar and Sagarika Ghose

As you can see from the videos above, the media starts with the assumption that one person is wrong and starts attacking them. Now, this person could be wrong, as was probably true in the Jessica Lall case. However, in the Aarushi murder case, the media was completely off mark. They made humiliating accusations and insinuations on her parents and others - Whether or not these originated from the media, they should have been thoroughly verified before broadcasting to the whole nation! In the end, it turned out that the parents were completely innocent... But imagine what kind of a blot comes on the miserable parents who not only lost their child but were also inflicted with unbearable pain from the media due the allegations levelled.

If the media were barking up the wrong tree without any repercussions, that would have been alright. But they have the ability to sway the whole nation. And they do it. The media seems to have developed a tendency towards taking sides and giving too many unsolicited opinions. A great example for this is Times View by Times Of India - a newspaper's job is to give news, not opinions. It is very bad when a newspaper or other forms of media does this. Take for example the Commonwealth Games - While several photos of how the games have let Indians down have been posted, including beds with paw-prints, and dirty toilets, not one photo of the fantastic developments done there posted. It's only now that an email is doing rounds to bring up the spirits of all Indians who have, by now, developed a mind-set that the organisers were utterly corrupt, and the games are a complete flop. (Interestingly, it turned out that the organisers in this case were indeed utterly corrupt :P But you get the idea in general)

Now, part of that IS true - But that's where the main problem lies... The media shows us only one part, and that prevents us from getting a complete image. We start seeing it with jaundiced eyes, where only negative things are shown to us. Artistick attempts to explain the disastrous effects of this kind of attitude, with a slight humour 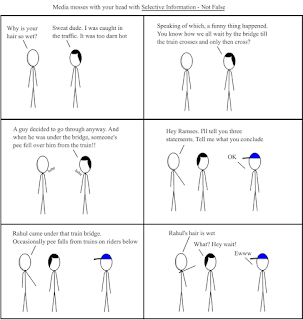 Therefore, it is up to all of us to start thinking independently of the facts that the media provides to us, because we are now aware that the facts provided, though true, are not necessarily the complete or actual picture. Don't jump to conclusions based on this.
---

(Interestingly, I had spoken against the prejudice of media long back, but then it was made out to be my way of getting back at a certain newspaper because they refused to post my comment against them... Now we see that Swami was right then and now :P Yeah, I told you so)

---
You may also want to read...
How media messes with your heads

Adarsh B - "A half truth is often more dangerous than a whole lie"...this had always been one of my fav....

vinayraj govindarajan - oh well swamiji u have posted an interesting idea......but i have a few questions:
1.why s the media taking a prejudiced stand after all? aren't they well aware of what they r doing? or are they?
2.why does the whole nation swing to the tunes played by the media? aren't v educated enough to take an unbiased stand?
3. is it because of the consumerist,globalised,"modernised" look that INDIA has to exhibit to the world?
4.isn't the US media too the same way?
i am sure u know where my statements r indicating to :)