May 01, 2010
Swami Gulagulaananda, Baba Gyani Triviani and Swami Nikhilaananda said in unison:
"We hope you have liked reading our quotes and preachings - We would like to take this opportunity to share the things that have kept us busy"

We have spoken about a hundred different things - Some that you agree with us, some you strongly disagree with us, some that you simply don't care... We tried to make you think, ponder, analyse, laugh and feel what we feel. Most often, we don't intend to say one thing is right, we just try to make you see our views as well as all views in general.

If there are any suggestions, comments, brickbats, or pieces of criticism that you would like to give us, please do.

Some things that have kept us Swamis busy
In this post, we don't want to preach :-) Instead, we would like to show you some things that we have been working on - Of course, we would love to get as much help from each of you as possible. After all, collaboration is the only way to move ahead and grow. Every bit of help is appreciated

Cartoons:
A site that originally had a variety of characters, the focus has now shifted to a group of stick characters who call themselves "Artistick". Sid, Tina, Ramses, Rahul and the Boss talk about a variety of things ranging from the geekiest to the craziest, to some funny ticklers and some involving romance. Artistick's newest breakthrough was their ability to move (something we hope to develop into a more professional version with passage of time)
Click here to visit the site 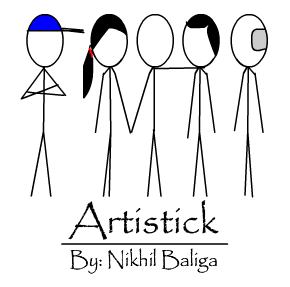 Illuminati Puzzles:
Named after the famous Illuminati that laid a trail only the brightest could solve, this is a series of puzzles that will grow slowly. With a series of levels, each one can be crossed by getting a password - The password is obtained by solving the puzzle in each page that range from ciphers to rebuses to random limericks. If you have any puzzles (preferably original) that you would like to share, please do use the contact page, and due credit will be given. Try getting your grey matter a little greased up, and get your cogs running.
Click here to visit the site
Chronicles of Nikhil Baliga
This site is a blog that has three fictitious Swamis, where generally every post has a Swami who makes prophetic statements or sometimes quips, and this is followed by an explanation. The name of the blog is Chronicles of Nikhil Baliga, however, the link is LifeAsIKnowIt-Nik... Self explanatory?
Click here to visit the site
Swami Gulagulaananda's site:
A site that was primarily intended to be a repository for Hindu mythological stories and meanings of various traditions and customs, Swami Gulagulaananda has been growing slowly. It was originally designed to resemble a wiki site, with various cross links. Unfortunately, the size of such sites and resources can hardly grow to a respectable size if only a single person is working towards it. Swami Gulagulaananda once again calls out to various contributors to send typed content - The editing will be taken care of, and published, and again, due credit will be given. You can also join in as a collaborator and help maintain the site.
Click here to visit the site
The Software Site - Software by Nikhil Baliga
The first site created by me, this was primarily a portal to host various programs I wrote while learning to code. All programs were given away for free, and some are listed on various freeware sites. Some received a lot of appreciation. The programs are no longer supported, but are available for download. Again, since they are written by a single person, you will not find them great, and they obviously won't be comparable with professional versions... But I hope you find them good :-) This site has useful software and some games for time pass. The site was automatically migrated from Google Pages to Google sites. So, don't expect anything to look good on it.
Click here to visit the site

That's about all the things that we work on. These sites have contact pages that you can use to send me any emails. If you feel like appreciating anything, please do so :) Of course, I prefer cash :P I am also on twitter if you want to listen to me chirping - @baliganikhil