Showing posts from January, 2010
Show All

The bold and the pitiful 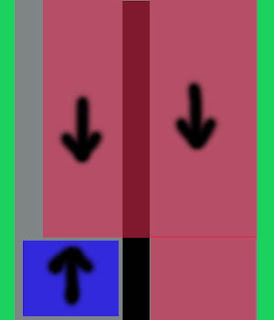 Swami Gulagulaananda said : " Not that I intend to sound like a wife; But here are the eight principles of life " Today was a very interesting day. I wanted to beat the morning traffic and reach office before time. So, I set out a little early. And reached the ring road, which has been recently laid - The broad road is fairly straight, and a road on which you can technically zoom past. Note that the word technically has been made bold, for I forgot to mention, that I am talking about a road in Bangalore... So, I was riding till I reached a major traffic jam. And this is a traffic jam that would have been logically unheard of. But well, where the hell is logic? This is just a pictorial representation of how the traffic jam was. It was incre dibly ridiculous. For multiple reasons. One, the people who are in red, are complete buffoons, for not only have they somehow managed to get their line completely jammed, they have come into the blue area and have jammed up that area
Post a Comment
Read more

January 22, 2010
Baba Gyani Triviani asked " Do super-villains shout out their plans ?" Apparently a boy, who used to do odd jobs for a living, was being ill-treated by his former boss. So, he quit his job on a radio talk show. The RJ, was moved by his pitiful situation. So, she decided to go on a job hunting campaign for him. What does she do? She asked on air if anyone in Bangalore will do anything for him. Then there were calls from various people who said that they would get him a house to stay, or some work, etc. There was finally one man who told that he needed a Bisleri delivery boy, and would be paid Rs. 3000. She asked if he would be given accommodation, and he said that a room would be given. Then she asked if he would be ill-treated. This is where I rolled my eyes. Ok, I can understand that his former employer ill-treated him, and perhaps he has some trauma, but you think and tell me - which man would tell on a live radio show that he was going to ill-treat the boy whom he i
2 comments
Read more

January 09, 2010
Swami Gulagulaananda said: " I often wonder how lighting candles and pulling weird stunts brings about an awareness... Isn't strong action always better than mere demonstrations " I often see a lot of people protest against something in really different methods - whether it is the conventional method of standing in large numbers wearing white and holding candles, to really weird and unconventional ways sending pink underwear to some groups. What I find funny or confusing is - What purposes do these actions serve? The latest one to get my cogs turning, is the new campaign that started going haywire on Facebook, where a large number of girls and women started posting random colours on their profiles as status messages with other people coming and liking it, and posting occasional comments. This was getting really confusing for many many guys, and some girls as well. So, finally, the cat was out of the bag. [ You can read about it here ] So, if you actually read from tha
Post a Comment
Read more

Intelligent or moronic? You decide...

January 08, 2010
Baba Gyani Triviani laughed: " Morons are fun, but intelligent morons are funnier " So, today I was coming back home by bus, and was happily dozing off... Shortly, I got up to see a huge traffic jam very close to Silk Board (which is a very busy place - nothing irregular about it) and I was looking out of the window and saw this scene. A man who was riding his bike, stopped at the footpath, and wanted to take his bike over it. He could have actually gone around the circle - but hey, riding one hundred metres more is a moral sin! So, instead, he decides to work smart, and not work hard. So, he parks his bike, lifts a huge almost rectangular rock, and places it along the pavement. Then he tries to move his bike on the rock from the side - and tries and tries... all in vain. Meanwhile, a vulture of a scooterist who was patiently standing in the side swoops in, and rides on the rock from a different angle. And voila! He successfully rides over the rock, and bamm!! his front wh
2 comments
Read more

January 08, 2010
Swami Nikhilaananda said: " I am stumped - Don't know whether to call these people 'pathetic' or 'apathetic' " I just happend to watch this really horrifying video clip on a news channel where a policeman covered in blood is writhing in pain, dying, with his hacked leg on his side, trying to sit up and falling back again while a convoy of a minister, with the "honourable" minister himself stand and watch - Not a single one of them helped!!! How can anything like this happen? Leave alone being a minister, he was a human first, and the least that he could do is help out a fellow human being! Apparently the policeman was attacked by Naxals, another menace in the country. These are the very same politicians whose lives are protected by these men in khaki, and when they need help, they are not helped even. The only word that can be used to describe such people is "inhuman" - Someone who is not human. As long as we have apathetic people in
1 comment
Read more

January 03, 2010
Swami Gulagulaananda said: " With a combination of existing stories and new, I would like to take your help to share our wisdom with the world " We now have a web site with stories and other interesting things to help you pass some time. Just give us a visit
Post a Comment
Read more

January 03, 2010
Swami Gulagulaananda said: " Fruits of any work - labour or rites, will reach only those who offer without hatred or jealousy " Here is a small story to explain the concept . Once upon a time, there was an old man named Narayana. Narayana had four sons - Bharatha, Lakshmeesha, Rudra and Gauthama. Each of these sons were married with children and lived in separate houses, but were close to their old father's house. One day, the old man lay in his deathbed, with all his sons and their wives and children around him. The old man spake thus - "My sons, I have always wanted to perform the sacred Yagna that does good to our entire family tree. But I never had the money. I don't have any time left. Soon I will pass to the other world. But please promise me that you will do this Yagna". The sons promised the old man, who soon departed on his journey to the other world. Now the sons were in a dilemma, for the Yagna that their father wanted to perform was one that c
Post a Comment
Read more
More posts